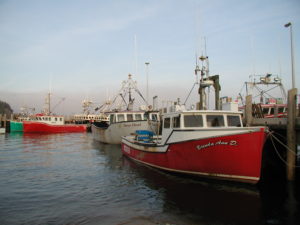 Since 1996, the Bay of Fundy Ecosystem Partnership (BoFEP) has organized major scientific workshops approximately every two years. The twelfth, attended by over 100 speakers and participants on 9-12 May 2018 in Truro, Nova Scotia, focused on “A Changing Fundy Environment: Emerging Issues, Challenges, and Priorities.” The workshops bring researchers, managers, policymakers, and community representatives to discuss a wide range of issues relevant to the Bay of Fundy region. This year the topics included ocean literacy, fisheries and coastal management, tidal energy, dykeland and wetland restoration, marine contaminants, and marine protected areas. The EIUI team has participated in several of the workshops and this year organized and presented a panel on questions about marine information use and influence at the science-policy interface and five posters about recent research projects.

Inspired by the efforts of the BoFEP Working Group on Ocean Literacy and Awareness, this panel discussed current initiatives and perspectives on improving Canadian ocean literacy outside of the interested/research community. A common theme running through this session was the difficulty of integrating relevant ocean information into the public education system; getting relevant information to teachers, and ultimately into school curricula is an ongoing challenge, even when there are clear opportunities. To foster greater interest in science and connect people to the ocean, the panel members highlighted the importance of hands-on experiences to engage students and members of the public in ocean science. The panellists also noted how a lack of resources can limit information access, and that collaboration, partnerships, cross-disciplinary approaches, and informal communication strategies can improve information use in public and early education settings.

The Integrated Coastal Management session introduced four talks focusing largely on the themes of collaboration and local knowledge. The presenters discussed the value of involving individuals most affected by coastal management endeavours, including community members, First Nations populations, and those who fish the coastal waters. The takeaway consensus from this session was that by encouraging communication and education, policies could be better created to reflect the interests of all stakeholders involved.

Tidal power and renewable energy, a major issue in the Bay of Fundy region at present, occupied two sessions where speakers presented current research efforts about safe and sustainable tidal prospects in the Bay. All of the researchers referenced the need for further research into effects of turbines on the environment and socio-economics of the region, indicating that understanding of the technology and its effects is still at baseline data collection stages, rather than preparing for technology commercialization. The presenters also made clear the importance of collaborative efforts to share information locally, regionally, and globally. The need to invest in social licensing about renewable energy in the Bay of Fundy was another focus of the sessions, particularly regarding making legitimate, credible, and trusted information more accessible to Nova Scotians to better engage them in a meaningful and informed manner. 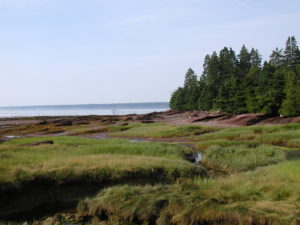 The first of four workshops presented on dykelands and tidal wetlands introduced issues and potential solutions concerning the growing vulnerability of these ocean-land barriers surrounding the upper Bay of Fundy. With 70% of Nova Scotia dyke systems at risk of overtopping by 2050, the importance of community engagement, appropriate budget allocation, and proactive approaches were highlighted throughout these sessions. Alex Wilson, a water resources engineer with CBCL Limited, spoke about the extensive work undertaken by his team to find solutions through a Truro Flood Risk Study, but overall the consensus was that no “one size fits all”’ resolution exists to address the issues surrounding these dykelands and tidal wetlands. Ultimately, the importance of continued consultation and sharing of information throughout various community and government levels was credited as a way to “strike the right balance” and arrive at solutions that protect stakeholder interests, surrounding communities, and these important ocean-land boundaries.

For a report about the opening plenary lecture see the blog post by Simon Ryder-Burbidge at this link.

The second plenary keynote speaker, Dr. Tony Walker, a researcher at Dalhousie University, outlined the harsh and critical reality of plastic levels in the oceans. While this issue is not new, the twenty-fold increase in plastics production over the last 50 years is rapidly increasing the level of micro and macro plastics threatening already fragile ocean ecosystems. Presently, more than 4.8 million metric tons of plastic waste are dumped in the ocean annually, but Dr. Walker turned attention beyond this staggering figure to outline a number of strategies to tackle this issue. From simple steps like reducing consumer plastics (e.g., drink straws and one-use bags) through market-based instruments, to the more complex process of creating new extended producer responsibility policies and legislative regulations, the audience was provided with steps to reduce plastic waste. Dr. Walker closed his lecture optimistically by expressing his belief that change can come from a bottom-up approach, beginning with small actions in homes, which can be as effective as government level policy changes. This message was aimed at rallying a community effort, with Dr. Walker stating that one does not need to be a policy maker or a scholar, the issue of plastic in the ocean needs to be a matter that resonates with everyone.

Keynote 3: Reflections on the Bay of Fundy and its Future

In the third plenary keynote, Dr. Graham Daborn, professor emeritus at Acadia University, reflected on the past, present, and future of the Bay of Fundy. Touching on the key themes of information that is already known, techniques and drivers that were used to gather this information, and knowledge gaps that still exist, Dr. Daborn delivered a fitting keynote presentation for the final day of the workshop. Reinforcing a common theme present in all sessions, he outlined the need for better communication strategies to disseminate information to the public, which has been a key shortfall of current Bay of Fundy research efforts. Dr. Daborn also stated that the Bay of Fundy is presently in a non-equilibrium state, and that research in the region should operate with this in mind. Finally, he explained that while tidal power initiatives and geological surveys have been information drivers within the Bay and have advanced understanding, continued multidisciplinary and multi-institutional research projects are necessary in order to allow everyone a choice and chance to contribute to management and conservation of the Bay of Fundy region. 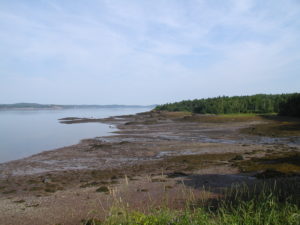 In the final day of the workshop, the EIUI team presented a panel session on understanding information use in decision-making for coastal and ocean governance. Dr. Bertrum MacDonald introduced the topic by drawing attention to information overload, highlighting the magnitude of information available via the Internet and social media. Focusing on major issues currently relevant to the Bay of Fundy region, he outlined complexities in the use of research information at the science-policy interface, referencing the EIUI research framework to demonstrate the importance of enablers, barriers, and context to information use and influence. Next, Dr. Suzuette Soomai presented an overview of key findings from her post-doctoral work on information pathways in the Canada Department of Fisheries and Oceans (Maritime region). Dr. Soomai outlined how trust relationships are essential to promote information use by decision-makers, and the need for researchers to provide credible, relevant, and legitimate information in response to decision-maker needs. James Ross then spoke on his research looking at the State of the Scotian Shelf Report. James found that although the report was infrequently cited, it was still highly accessible and useful for stakeholders from a variety of sectors. Specifically, relevant to the Bay of Fundy, James encouraged sustained promotion of information materials to the public and decision-makers to improve information use. Rachael Cadman spoke next outlining her research on the role of environmental non-governmental organizations (eNGOs) in the marine protected area (MPA) process for three different Canadian MPAs. Rachael found that eNGOs often perform a boundary/bridging role to foster relationships with decision-makers and facilitate the uptake of scientific information – a role that is currently undervalued in the Bay of Fundy region. Finally, Simon Ryder-Burbidge concluded the panel with his research on ocean connectivity and coastal community values. Reflecting on past mis-management partially caused by perceptions of the ocean being an inexhaustible resource, Simon discussed the significance of incorporating community coastal values into marine management and decision-making. He concluded his talk by asking the audience to consider what connection means in terms of the Bay of Fundy and its surrounding communities, and how connectively could be measured and used to inform future planning processes.

The workshop successfully touched on many diverse topics affecting the Bay of Fundy and the surrounding coastal areas, but the themes of marine research communication and education were clear concerns prevalent throughout discussions between speakers and audience members. Nonetheless, participants of the 12th Biannual Bay of Fundy Science Workshop remained hopeful and impassioned, continuously returning to collaboration with local communities, First Nations, and various governmental levels as the most promising approach to address the variety of emerging issues, challenges, and priorities. Through ocean literacy in early education and reaching further into the general public to involve everyone in discussions surrounding the future of the Bay of Fundy, a stronger research and knowledge network can be built to help push important and timely issues to the forefront and focus of policy outcomes.

The EIUI team presented five posters at this workshop:

1) “Global Resource, Local Needs: A Case Study of the Use of the International Aquatic Sciences and Fisheries Abstracts Database” by Diana Castillo, Bertrum H. MacDonald, and Suzuette S. Soomai

EIUI team member, Peter Wells, was the program chair for this highly informative workshop. Further information about the workshop will be available in the forthcoming proceedings. Check the BoFEP website later this summer.

Photographs of the Bay of Fundy region courtesy of Peter G. Wells.