Today, evidence-based policy making (EBPM) is widely reported in news stories and discussed in research publications. Even when use of evidence is obviously contested, decision makers recognize that the concept merits attention. The release in September 2017 of The promise of evidence-based policymaking, the final report of the American Commission on Evidence-Based Policymaking, for example, joined a long line of books, papers, reports, and guides on the subject. As a concept, EBPM has been in common parlance since the 1990s when it gained prominence through the rhetoric of the Blair government in the UK. Much has been written on the topic since and many initiatives have attempted to put EBPM into practice. Still, this seeming straightforward idea encounters frequent roadblocks and has been challenging to implement. The American Commission’s report is one of the latest efforts to overcome barriers preventing the use of evidence to inform and support policy development, implementation, and evaluation. Why is EBPM so difficult to achieve? Three recent books help to explain why. These volumes also describe how policy work is undertaken. 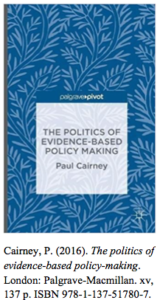 Perhaps no phrase better exemplifies the shortcomings of an idealized evidence-based policymaking model than “the facts speak for themselves.” The notion that, for a given policy problem, there is a single optimal solution that can be identified objectively through the accumulation and analysis of data, carries with it a series of faulty assumptions, including:

Together, these assumptions would lead to an inescapable conclusion: that policy failures are the sole result of policymakers “playing politics”: ignoring objectively sound scientific advice in favour of appeasing narrow interest groups or fulfilling ideological commitments in the face of the facts.

Paul Cairney’s recent monograph, The politics of evidence-based policy making, tackles these assumptions head-on, meticulously documenting the many ways in which the ideal fails to capture the nuance and challenges of actual policymaking. He suggests that, in reality, democratic decision-making processes exist precisely because citizens in a democracy—including scientists—have differing values, and accordingly disagree about what optimal policy outcomes will be, how these outcomes can and should be achieved, and even which policy problems are most worthy of limited space on legislative and bureaucratic agendas. Furthermore, the deliberate pace of scientific knowledge-generation and limited resources to commit to research make it inevitable that policy decisions will sometimes have to be made well before conclusive scientific evidence can be generated. In short, Cairney argues, the idealized model of EBPM describes an ideal that may simply not be realizable.

Cairney’s primary purpose, however, is neither to praise nor to bury the EBPM concept: rather, by contrasting the ideal and the reality, he encourages scientists and policymakers alike to develop a better understanding of the interactions between evidence and policy. Across the five chapters of this slim volume, Cairney presents a thorough analysis of existing models of the policymaking process, considers both successful and unsuccessful cases of the application of science to policymaking, and seeks to identify a more practically useful definition of EPBM. With its concise prose, meticulously researched argument, and provocative engagement with one of the core concepts of contemporary policy analysis, The politics of evidence-based policy making is a must-read for scholars studying the policy process and scientists seeking to influence it.

If Cairney’s book explains why naïve views about evidence-based policy making need to be revised, Policy work in Canada aims to provide a thorough account of how policy work actually functions in federal and provincial governments as well as non-governmental organizations in Canada. The latter have been infrequently studied but are increasingly important in policy development activities and governance strategies in Canada and elsewhere (see, for example, “Policy Dialogue and Engagement between NGOs and Governments: Views from the Bay of Fundy”).

In 18 chapters, Howlett, Wellstead, and Craft present a new schematic of policy capacity that “includes analytical, managerial, and political skills as well as resource endowments at the individual, organizational, and policy subsystem levels” (p. 9). As the editors point out, “policy scholars interested in the role of policy analysts in promoting and practicing evidence-based policymaking rely on very partial survey results, or on anecdotal case studies and interview research” (p. 11). In this book, the authors strived to overcome this gap through “path-breaking” research that goes beyond the surface to show that policy work is “constituted by more complex and multi-sided practices” than previous researchers had acknowledged. They note, though, that information is central to policy development, since policy analysis is “a method for structuring information and providing opportunities for the development of alternative choices for the policy maker,” which means “providing information or advice to policymakers on the relative advantages and disadvantages of different policy choices” (p. 19).

The seven chapters in Part 2 of the volume account in considerable detail for the current status of policy work of federal and provincial governments as well as intergovernmental activities and the role of political advisors who are appointed by and work directly with cabinet ministers. In each of the chapters, the authors draw heavily on research data to provide a perspective based on empirical evidence. While treatment of both the public service and political staff is presented, consideration of the third level of government, municipal or local, receives less attention in this group of essays.

Part 3, ostensibly about policy work “outside government,” e.g., the important and varied contributions of consultants, academic researchers, political parties, and NGOs, also includes the interesting study of evidence-based policymaking at the Ontario Ministry of Natural Resources by Nicole Klenk, a faculty member in the Department of Physical & Environmental Sciences, University of Toronto (Scarborough). This case study, squarely within government, surveyed forest scientists and policy analysts in various units of the provincial government department regarding knowledge mobilization and construction of evidence. Klenk concluded that a close relationship exists between producers and users of scientific knowledge but noted that the results also showed a tension between research expertise, politics, and democratic practice. The latter conclusion resonates with the main points of Cairney’s book.

In Parts 4 and 5, the contributors discuss initiatives to improve Canadian policy work, e.g., recruitment of high-calibre policy workers, and deployment of digital platforms to foster knowledge sharing and collaboration among policy analysis. The editors sum up the volume by noting that understanding the context in which policy analysis and development occurs is important, in part because departures from orthodox types of policy making (internal, rational, speaking truth to power) to “more diffuse and fragmented ‘sharing of influence’” approaches are increasingly common. Contemporary policy development is “more porous, fluid, and diversified,” which crosses a myriad of boundaries within various levels of government and beyond to the wider public with its many layers of participants.

Edited by Michael Howlett and Ishania Mukherjee, and featuring contributions from an international team of 39 authors, the Handbook of policy formation represents an ambitious effort to synthesize the current state of knowledge regarding the formulation of public policy around the world. Though written exclusively by scholars of policy rather than practitioners, the handbook targets scholars, students, and practitioners alike in an attempt to clarify the multi-dimensional process by which public policy is developed. The eight sections of the handbook cover practice—the processes of policy formation, instruments available to policymakers, and the function of policy advice—analytical techniques employed by scholars to investigate those processes, and the political trends influencing the development of policymaking mechanisms.

Readers who share the interests of the Environmental Information: Use and Influence research program will find much of note in the Handbook, as several chapters deal directly with themes that have emerged from some of our recent studies. Genevieve Fuji Johnson’s contribution tackles the role of the public participation in the policy process (an area also investigated in EIUI’s studies of the State of Nova Scotia’s Coast Report and the State of the Scotian Shelf Report) (see Soomai, MacDonald, & Wells, 2013 and Ross & Breeze, 2016). Justyna Bandola-Gill and Catherine Lyall take up the theme of knowledge brokers, similarly to a recent EIUI study of tidal power communication networks in the Bay of Fundy (see Wilson & MacDonald, 2018) and James G. McGann addresses the role of think tanks in policy formulation.

A later chapter, “Trends Towards Evidence-Based Policy Formulation,” sees Holger Strassheim, like Paul Cairney, attempt to move beyond the reductive “evidence-based vs. political” policy-making dichotomy by asking some familiar questions:

What are the reasons for public criticism of EBPM? How can we explain the simultaneous scientization and politicization of policy making? And how can we make sure that policy-relevant evidence and expertise are publicly credible, politically relevant and scientifically valid at the same time? (p. 505)

Like Cairney, Strassheim rejects calls to remove “politics” from the evidence-based policymaking process, noting that issues become “politicized” when there are society-wide normative disagreements that prevent a consensus policy decision from being reached. As such, an attempt to insulate contentious issues from the “politicization” of the general public could potentially lead to “micro-politicization,” where political debates are still resolved with reference to normative preferences, but only the normative preferences of a small circle of decision-makers and expert advisers. Strassheim concludes that the very efforts of EPBM-proponents to insulate scientific expertise, advice, and authority from politics have paradoxically worsened the problem of politicized EPBM. Strassheim and Cairney’s publications, taken together, point the way for the field of policy studies to develop a more sophisticated and realistic understanding of the role of science and scientific expertise in policy formulation.

Together, these three new books emphasize that understanding the nuances and complexities of policy making is a necessary precursor to effective application of evidence-based policy making. Naivety about, or plain ignorance of, decision-making processes is a barrier to the development of solutions for prominent environmental and sustainability issues, e.g., climate change and food security, that grow in gravity almost daily. Pushing more and more information—evidence—into policy development scenarios will likely be ineffective without appreciating how policy processes work. The multitude of actors working at the science-policy interface would definitely benefit from reading these new books.