At the recent 12th biennial BoFEP Science Workshop, Dr. Kimberley Davies, a post-doctoral researcher in the Department of Oceanography at Dalhousie University in Halifax, known for long-time work on North Atlantic right whales, presented the opening keynote lecture: “An Uncertain Future: The Right Whale’s Fight against Environment, Biology, and Ocean Urbanization.” The Bay of Fundy is arguably the most important habitat for the North Atlantic right whales, as both a feeding ground and a meeting place where the whales return each year. Canadian and American marine scientists have been studying right whales in the Bay of Fundy for more than three decades, and much of the knowledge about the species has been amassed on this population. 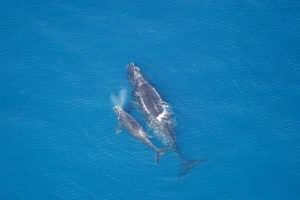 Right whale conservation has also been a major focus in the area. Nearly a decade ago, Dalhousie University researchers undertook a pioneering study on the impacts of ship strikes on whale populations in the Bay of Fundy, showing that a combination of reduction in speed and a small shift in traditional Maine-New Brunswick shipping lanes could reduce the risk of lethal collisions by up to 90%. Recently, however, right whale populations in the North Atlantic have been on the move. Since 2015, the animals have been appearing regularly in the Gulf of St. Lawrence, to the surprise of scientists and mariners who had not known them to inhabit the area previously. Unlike the Bay of Fundy, where they have been well observed in the past, until the past year specific management policies related to right whales in the Gulf of St. Lawrence have not been developed. Among other factors, this management gap has played a significant role in the staggering number of right whale deaths recorded in the past several years – 12 of 18 mortalities in 2017 were attributed to ship strikes or fishing rope entanglements in the Gulf. With a population hovering around 450 animals in total, and an estimated 50-100 breeding females, each death is a meaningful loss for the future of the species. Conservative estimates extrapolating from current casualty rates suggest that the species could be extinct in as few as 38 years, and likely functionally extinct long before this, according to Davies, as breeding-age females are dying out faster than males. More than 85-percent of right whales in the North Atlantic have scars from entanglement, and these injuries often inhibit the females’ ability to conceive or to birth healthy young.

The uptick in mortalities among this iconic species has received significant attention both from government and news media. In March, Fisheries and Oceans Minister Dominic LeBlanc implemented a series of emergency regulations in the Gulf region in an effort to slow losses attributed to anthropogenic activity, including a closing of lucrative snow crab fisheries and speed limits for marine shippers. While these efforts are undoubtedly important, some question still exist as to why the whales decided to move into the Gulf of St. Lawrence in the first place. If they’ve moved once, what’s to stop the population from moving again, to another unregulated and more dangerous area in the future? This is where Dr. Davies’ research comes in.

North Atlantic right whales are filter feeders, preferring small marine organisms like zooplankton for food. To meet their energy needs, the whales consume an incredible volume of these tiny creatures. The weight of one average-sized North Atlantic right whale is approximately equivalent to 50 billion zooplankton – a consumer-food size ratio similar in nature to a human subsisting on a diet of minute bacterial organisms. Typically, right whales require several hundred million zooplankton, or copepods, more broadly, each day to stay satiated.

For this reason, the whales target larger, late-stage copepods in the Bay of Fundy during the early summer seasons. One of the most common is called Calanus finmarchicus, a species common in the Bay of Fundy and elsewhere, packed full of fatty lipids after a preserved dormancy in the cold waters of the Atlantic during the winter season. Davies points to a linear relationship between the emergence of these late-stage copepods and right whale presence across the animal’s known environmental range.

Davies suggests the right whales’ shift in habitat could have been caused in-part by a phenological shift in their Calanus finmarchicus prey, from summer-fall population maximums, to winter-spring population maximums. Early evidence suggests that the increasing ocean temperatures could be responsible for the change in zooplankton dynamics, but studies are still ongoing. Given the relationship that appears to exist between North Atlantic right whales and the tiny organisms they feed on, in an attempt to find new nurseries and more whales, and to figure out where the known population might move next, Davies and her colleagues asked a basic question: where are the Calanus finmarchicus? 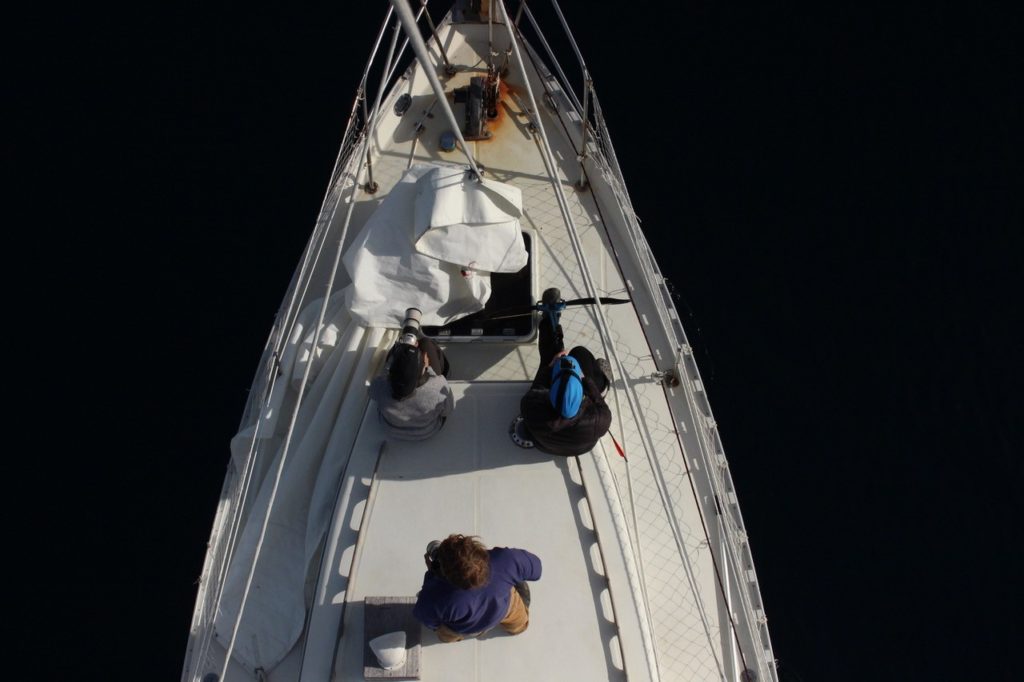 She and her team worked to quantify the processes that facilitate the aggregation of the copepod species in summer and fall habitats. To figure out where the right whales might be feeding, Davies and her team had to determine where “energy availability,” i.e., number of late-stage copepods, exceeds “energy requirement,” i.e., how much the whales need to eat. North Atlantic right whales will not even engage in feeding activities unless they know enough food is available to properly sustain them. Food limitation has also been shown as a major driver of calving patterns; of significant concern to researchers after no new calves were found at the end of this year’s survey season in the U.S.

Davies, in collaboration with Woods Hole Oceanographic Institution researcher Mark Baumgartner, has deployed a program called the WHaLE Project, employing a system of gliders to collect acoustic information on right whales across the North Atlantic. Interpreting the oceanographic data collected simultaneously by the gliders, Davies and her team can make inferences about where Calanus finmarchicus populations are likely to thrive at a given time of year. It was these bathymetric markers that originally led her to the western Gulf of St. Lawrence, to a deep-water channel near the Quebec-New Brunswick border where hundreds of right whale sightings have been recorded in the past several years – and where significant copepod numbers have since been recorded. Davies hopes to continue the process to monitor right whale movement and distribute the information in real time via open-platform websites, cellphone apps, and the Canadian Coast Guard’s Continuous Marine Broadcast System. Ideally shippers and fishers can use WHaLE Project data to avoid areas where right whales might be present at a given time.

In the future, Davies envisions a series of acoustic buoys transmitting from the Laurentian Channel, a known right whale transit route, collecting information continuously and updating mariners on species’ whereabouts. The current glider program relies heavily on educated guesswork to find the animals. Similarly, Mark Baumgartner is developing new, non-invasive methods for short-term tagging that could help to track the whales more accurately in the future. Baumgartner’s unit has also been responsible for driving new line-less fishing technologies for lobster fisheries that overlap right whale habitat.

In conclusion, says Davies, climate change and shifting population dynamics makes the Bay of Fundy more important than ever for the North Atlantic right whale, as a relatively stable feeding and calving habitat for the animals. More than 100 whales were sighted in the Bay last year, and Davies suggests that the strength of the population likely hinges on a sustained food supply in combination with ongoing conservation efforts supported by governments and industry alike. If management measures in the Bay of Fundy can protect resident right whale populations, says Davies, similar measures should work elsewhere as well. The future of the species may depend on that assurance.