This year, the term “post-truth” has gained such prominence in international media and debate it was named Word of the Year by Oxford Dictionaries. Often associated with “post-fact,” the adjective refers to “circumstances in which objective facts are less influential in shaping public opinion than appeals to emotion and personal belief.” In addition to the Oxford Dictionaries’ informative explanation of the term, Kathleen Higgins recently published a “guide for the perplexed” in Nature, for those attempting to understand the implications of post-truth politics.

Both “post-truth” and “post-fact” were words voiced by many speakers at the second conference of the International Network for Government Science Advice (INGSA) hosted by the European Commission in Brussels on 28-29 September 2016. This conference was a timely event for “one of the fastest growing areas of public science endeavor – the provision of science advice for public policy” (International Council for Science, 2016). The relationship between science and society is changing, said Sir Peter Gluckman, who co-chaired the organization of the conference, and the nature of policy making is also evolving. Political developments in Britain and the United States in recent months highlight the relevance of these observations.

Over 600 registrants from over 70 countries met in Brussels for the second INGSA conference. The first – organized by Sir Peter Gluckman, Chief Science Advisor to the New Zealand Prime Minister – was held in Auckland in 2014. The Brussels conference featured an impressive line-up of international speakers and the conference facilities provided by the European Commission were excellent for allowing live streaming of plenary sessions and for global networking. 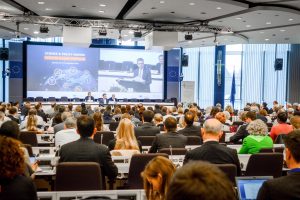 Carolos Moedas, European Commissioner for Research, Science, and Innovation, set the stage in his opening remarks. He noted that in today’s seemingly post-factual environment, where the validity of advice is widely questioned, the role of scientific advisor has never been more important. He claimed that the job of advisor has “dramatically changed.” Simply providing answers is no longer sufficient. Politicians and the public will “only accept the answers if they understand the process” by which the advice has been developed. In a world dominated by over one billion smart phones and vast quantities of information, a prevailing anxiety occurs because people “cannot connect the dots.” Moedas stressed that scientific advisors must go a step further than merely providing evidence. They need to explain it by drawing on the perspectives of the social sciences and humanities, and by being transparent in their work. The latter is important for building trust and confidence in evidence offered as advice.

These themes were echoed by both speakers and participants throughout the two-day conference. For example, Rush Holt, chief executive officer of the American Association for the Advancement of Science (AAAS), pointedly stated: “Naïve advisers think that they need only to teach the policy-maker what the facts are, and then good solutions and good policy will follow…Although science is the path to the most reliable knowledge, the public and government officials first must believe that and must trust the persons giving advice” (Jarvis, 2016, p. 427). Holt could call on his own considerable experience – as a member of the U.S. House of Representatives for 16 years prior to moving to his current position with AAAS – to support these statements.

The conference speakers drew on a broad wealth of experience globally, but largely did not present anything strikingly new. The provision of science advice for policy development is not a new interest and today the body of literature on this subject from scientific and social scientific perspectives is large. This year alone close to 800 publications about the science-policy interface have been brought out (based on a search on that concept in Google Scholar). The conference was particularly helpful, though, for bringing scientists, policy experts, and researchers together in a forum that could equip and encourage on-the-ground activities in a diversity of contexts. One of the main goals of the meeting was to bring participants from around the world together to discuss common principles and best practices for science advice. In fact, one of the projects that INGSA is pursuing is the development of principles and guidelines for science advice. The Declaration of the 2015 Budapest World Science Forum on Enabling the Power of Science, in clause 4 on Scientific Advice for Policies, called for concerted action of scientists and policy-makers to define and promulgate universal principles for developing and communicating science to inform and evaluate policy based on responsibility, integrity, independence, and accountability.

INGSA has taken up this call, and as Marc Saner (University of Ottawa), Sir Peter Gluckman, and others noted throughout the conference, a draft set of principles and guidelines will be developed over the next year and then presented to a meeting of the World Science Forum in Jordan in 2017.

In his address on the first day of the conference, Gluckman declared that “policy making is messy,” emphasizing that evidence-based decision 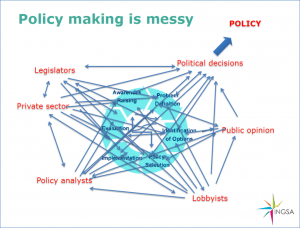 making (or more likely evidence-informed decision making) is definitely not a trivial matter. The plenary and parallel sessions during the two days shed light on numerous aspects of this view from the perspectives of significant global issues – climate change, migration, and health – and development of the tools, skills, and practices of science advice.

Recognizing that scientific advice must not be assumed to be of interest to policy- and decision-makers alone, the second day of the conference featured parallel sessions designed to consider the roles of the media and social media, national academies, and citizens and civil society in the broader contexts of public policy development. For example, Sir Philip Campbell, Editor-in-Chief of Nature and Nature publications, chaired the session entitled “Lost in translation? Science advice, media, and social media.” The speakers in this session, particularly Linda Nordling, a freelance journalist from South Africa, highlighted transformations in the media industry and significant current challenges in equipping and incentivizing competent science journalists, especially in developing countries. Other speakers in this session noted that the prominence of social media in today’s society provides communication opportunities that should not be overlooked or underemphasized even though mastering this media with its multiple forms and channels can be intimidating.

In general, the conference highlighted the diversity of science advice methods practiced around the world, including the European Commission’s new science advice mechanism. While scientists and scientific associations have had a long-time interest in providing advice, based on research, to the policy community, it is clear that a gap continues to challenge communication between scientists and policy- and decision-makers. Although context means the existence of many science-policy interfaces, questions about how and by what means information flows (or fails to migrate across the gap) are common to every instance. Failure to pay attention to this point will hamper the very efforts that will be taken to mobilize scientific advice globally. Barring the political perspectives that influence decision making everywhere, moving forward to equip and empower science advice processes is essential for solving major global problems. This conference was instrumental in this initiative.

The videos, slides, and reports generated by the conference can serve as a substantial resource now available to researchers, practitioners, and students.

In addition to these resources, the new, open-access Palgrave Communications series on scientific advice to government was launched at the conference by the co-editors, James Wilson (University of Sheffield) and Sir Peter Gluckman.

The next conference of the International Network for Government Science Advice will be held in Tokyo in 2018. Further details about INGSA are available at this link.

Flood, A. (2016, November 15). “Post-truth” named word of the year by Oxford Dictionaries. The Guardian. Retrieved from https://www.theguardian.com/books/2016/nov/15/post-truth-named-word-of-the-year-by-oxford-dictionaries

Snowden, W. (2016, November 18). Have we smothered the facts?: “Post-truth” named word of the year. CBC News. Retrieved from http://www.cbc.ca/news/canada/edmonton/have-we-smothered-the-facts-post-truth-named-word-of-the-year-1.3856862