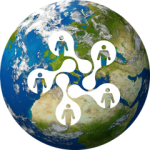 In recent weeks, Environmental Information: Use and Influence research team members have presented papers and posters to audiences in Europe, United States, and Canada. Dr. Bertrum MacDonald was the invited, keynote speaker at the Informational Governance and Environmental Sustainability Symposium at Wageningen University, Wageningen, the Netherlands on 16-17 October 2014. Drawing on research undertaken in the EIUI program, he spoke about “Probing the Science-Policy Interface: Insights and Challenges Arising from Studies of Marine Environmental Information.” The symposium, organized by the Informational Governance program at Wageningen University, brought together participants from Norway, Sweden, Belgium, United Kingdom, Russia, and the Netherlands to present papers. In addition, doctoral students gave reports of research projects to industry partners. Many of the papers will be published in a special issue on informational governance topics in the journal, Current Opinion in Environmental Sustainability, in 2015. 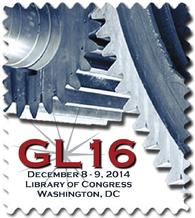 On 8-9 December 2014, Dr. Bertrum MacDonald participated in the 16th International Conference on Grey Literature, “Grey Literature Lobby: Engines and Requesters for Change,” hosted by the Library of Congress in Washington, DC. This annual conference attracts scholars and librarians from around the world to present papers and posters. Bertrum presented the paper “How Grey Literature Informs Policy and Decision Making: The Necessity to Understand the Processes” (co-authored with James Ross, Suzuette Soomai, and Peter Wells). This paper will be published in the forthcoming spring 2015 issue of The Grey Journal. 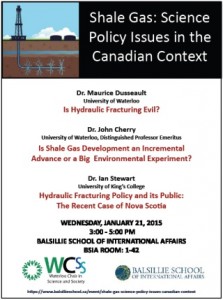 Dr. Ian Stewart contributed to a panel discussion, Shale Gas: Science Policy Issues in the Canadian Context, 21January 2015, hosted by the Balsilie School of International Affairs, University of Waterloo, Waterloo, Ontario. Alongside Dr. Maurice Dussault and Dr. John Cherry, leading scientists in the field of shale gas and its environmental impacts, Ian’s paper, entitled “Hydraulic Fracturing Policy and its Public: The recent case of Nova Scotia,” offered a perspective on the place of public consultation and the role of environmental information within that process, leading up to the provincial government’s ban on hydraulic fracturing through legislation approved in late 2014. This event highlighted both common ground and real differences concerning both the state of environmental science in this area, and the importance of citizen engagement with that science.

James Ross, Sarah Chamberlain, and Shelby McLean presented the poster “Improving the Communication of Marine Environmental Information” at the 2015 Sustainability and Environmental Research Symposium on 13 March 2015, and a similar poster at the 2015 Information without Borders conference, “Information Management for Climate Change Adaptation” on 11 February 2015. This poster presented integrated findings from three Master’s research projects — Ross, Master of Library and Information Studies; Chamberlain, Master of Marine Management; and McLean, Master of Marine Management. These projects, which investigated the use of marine information products by various stakeholders, were conducted in collaboration with two EIUI research partners, the federal Department of Fisheries and Oceans, and the provincial Department of Fisheries and Aquaculture.