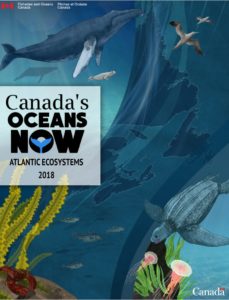 To great fanfare, the Department of Fisheries and Oceans Canada (DFO) recently released Canada’s Oceans Now: Atlantic Ecosystems 2018 (DFO, 2019). This 43-page publication is based on a larger scientific synthesis report presented at a meeting in December 2017 (Bernier, Jamieson, & Moore, 2018).

Canada’s Oceans Now: Atlantic Ecosystems 2018 focuses on the overall health of the ecosystem in Canada’s Atlantic Ocean. The report covers three bioregions – the Gulf of St. Lawrence, the Scotian Shelf, and the Newfoundland and Labrador Shelves – and presents status and trend information on both the ocean environment (seven indicators) and life in the Atlantic (twelve indicators) assembled by specialists in the specific topic areas. The observed and expected impact of the changing environment for fish and invertebrate communities, marine mammals, sea turtles, seabirds, and invasive species are carefully described. Overall, the findings from the three bioregions document warming sea temperatures, reduced ice cover, and related oceanographic changes resulting from global climate change. As the report concludes in “Everything is Connected”:

The interconnected relationship between organisms and processes in the Atlantic Ocean ecosystems are changing. The changes are occurring both naturally and through human influences. Real change is occurring in ocean food webs. The types of species, their location, habitat, and diet are shifting at different rates and scales alongside physical changes in the marine environment. (p. 43)

Recent rising sea temperatures, for instance, have led to the decline of species that prefer cooler waters. Conversely, warmer water species are becoming more dominant in some areas as they move further north. This report is a welcomed initiative and ongoing monitoring and research about the Atlantic Ocean environments will increase understanding of the state of marine ecosystems, how they are changing, and furnish evidence for public policy and management practices.

This report provides important, timely information about the 19 individual indicators. However, the report lacks a summary, that is, a synthesis of information for these indicators into a composite ocean health index, despite there being a number of ways of doing so, the best (most accepted) of which is the Oceans Health Index approach of Conservation International. Hence readers are left to interpret the overall health of the marine ecosystem by themselves. Is the health good, medium, poor? Is it declining? Staying the same? Improving? The interested public wishes to know, and indeed all citizens should be interested, since as the report states: “every Canadian shares a deep connection with these dynamic marine ecosystems” (p. 1).

When a report such as Canada’s Oceans Now: Atlantic Ecosystems 2018 is released, it typically receives extensive media coverage for a day or two (e.g., Withers, 2019) and then disappears from the news cycle. How influential is such a report? Will Canada’s Oceans Now Atlantic Ecosystems 2018 be read and considered by the senior policy makers in the federal government (e.g., in DFO and Environment and Climate Change Canada) and in provincial governments, and by researchers, personnel in ocean-focused industries, staff of non-governmental organizations, community groups, or the public? The answer is probably doubtful (or to be fair, is as yet undocumented). Research by members of the EIUI team have shown that awareness of state of the environment reports can be very low. James Ross, for example, completed a study about the awareness and use of The State of the Scotian Shelf Report (see, Ross and Breeze, 2016), and other team members conducted investigations ofThe State of the Gulf of Maine Report and The 2009 State of Nova Scotia’s Coast Report (Soomai, MacDonald, and Wells, 2013; see also, Wells, 2003). Moreover, when state of the environment reports, such as Canada’s Oceans Now Atlantic Ecosystems 2018, are interchangeably mentioned by the actual title, or “The State of the Atlantic Ocean report” (Withers, 2019), and or “State of the Oceans” report (as in the DFO file label), measuring awareness and use of such reports becomes a complicated task due to the plethora of the actual and imagined titles. Furthermore, the report is described as DFO’s first state of the environment report for Canada’s Atlantic Ocean, yet, there has been previous comprehensive reporting of this region by other agencies since the 1980s (see, for example, Wells & Rolston, 1991).

Thus, despite the good information and the intent of Canada’s Oceans Now: Atlantic Ecosystems 2018, it may, or likely will, soon be forgotten by the public and languish on the government website and in government files, perhaps not having the influence on decisions, policies, and programs that it deserves. Preparation of this report was definitely an important exercise for accumulating and analyzing the historical and current data about the 19 indicators. This report is a big step in the right direction of carefully evaluating how the marine ecosystem of the North-west Atlantic is changing and why. However, the value of the report is diminished by the lack of an overall synthesis of the various indicators of marine ecosystem health, despite what the report has accomplished. The full report, when it is released, will provide more detailed evidence.