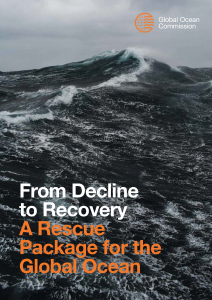 Reports written and published by major ocean organizations, by definition grey literature,  may be very influential if given coverage by the press, are noticed by politicians, policy makers and marine resource managers, and offer proposals for positive action.

Five “Drivers of Ocean Decline” are identified that act as serious barriers to a healthier ocean. They are: “a rising demand for resources; technological advances; decline of fish stocks; climate change, biodiversity and habitat loss; and weak high seas governance” (p. 5). By “understanding the drivers of decline individually and together, [the GOC has] come to understand that what is needed is an integrated rescue package which can deliver ocean restoration when undertaken as a whole” (p. 3). 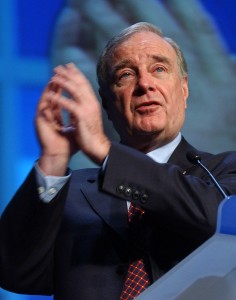 The GOC report was the focus of a talk by the Right Honourable Paul Martin, former Prime Minster of Canada, at the Coastal Zone Canada Conference 2014, held in June in Halifax, Nova Scotia.  Mr. Martin described the need for a revitalized global governance mechanism for the high seas, led through a specific global ocean agency.  He argued that Canada should stand up and take on a greater role as a world leader in the promotion of ocean health. However, Canadians cannot rely solely on governmental bodies to bring such global issues to the fore. Rather, scientific organizations, universities, individual scientists, and NGOs need to take on the task and make their voices heard, such as at the upcoming international G20 meeting in Australia.

Reflecting on a commercial perspective, Mr. Martin also suggested that oceans management and wellbeing are very much in the interest of industry. He stressed that “the right thing to do is in the economic interests of everyone” (our notes, June 19, 2014).

As invaluable as such ocean reports are, they will not be influential unless their main message can be effectively disseminated. The crucial role of public figures to draw attention to these reports, as shown by Mr. Martin’s excellent presentation at CZC 2014, cannot be overstated.

Canada needs to regain its former role as a leader on ocean affairs.  It should be noted that the Obama administration of the United States has recently pursued a number of key initiatives toward improved ocean health, including the Ocean Action Plan that aims to “end overfishing by 2020; reduce nutrient pollution 20% by 2025; reduce carbon emissions; get at least 10% of the ocean protected by 2020” (Mission Blue/SEA Alliance, 2014). Perhaps the GOC report will move Canada in a similar direction, after careful consideration by our ocean champions and responsible government departments.

Global Ocean Commission. (2014a). From Decline to Recovery: A Rescue Package for the Global Ocean. Retrieved from https://s3.amazonaws.com/missionocean_www_uploads/reports/GOC+Full+Report.pdf

Global Ocean Commission. (2014b). From Decline to Recovery: A Rescue Package for the Global Ocean Report Summary. Retrieved from ttps://s3.amazonaws.com/missionocean_www_uploads/reports/GOC+Summary+Report.pdf Mission