The relationship between social science research and policy-making suggests policy may be informed by, rather than based on, evidence. Weiss (1977) supports this statement and claims that government uses social science to enlighten rather than dictate policy. Recently, Reimer & Brett (2013) agreed and believe that municipalities often do not have the expertise to make use of social scientific research; they found that policy is typically based on informal social networks and personal connections rather than scientific evidence. Prewitt, Schwandt, and Straf (2012) characterize the divide between the fields of social science research and policy-making as the “two communities” phenomenon.

Weiss believes that evidence-based policy is not usual in the political sphere because creating policies solely based on evidence is complicated by three realities. The first is that social research findings can be biased because “shifts in public opinion trigger changes in how government allocates research funding and which perspectives will be brought to attention” (1977, p. 535). Weiss also states that research utilization is not the primary function of social research in policy-making, because policy-making isn’t as concerned with truth as it is with reaching a politically feasible consensus (p. 533). Lastly, Weiss believes that evidence-based policy is not normal because government officials use research to orient themselves to, and gain new perspectives on policy issues, but they ultimately solve these problems based on decisions that fall in line with their own judgments (p. 534-535). 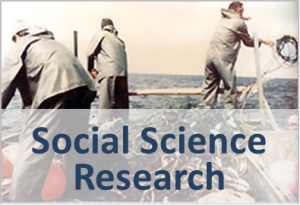 Weiss claims the most common function of social research in the world of policy-making is that of enlightenment, i.e., policymakers’ perceptions of the problem is informed by evidence but their decisions are not based on it. She also notes that if social researchers can “come to a consensus with important segments of policy actors on the basic value-orientation of their work and accept the fundamental goals, priorities, and political constraints of the key decision-making group” social research will have more utility in policy-making (p. 544).

Rural knowledge in decision and policy-making

Geography plays a large role in the way information is disseminated and used. Reimer & Brett argue that socially entrenched factors like personal experiences, ideologies, local economies, and politics have a tendency to supersede scientific information in remote communities (2013, p. 272). As such, they declare that the most effective way to transfer knowledge is through “informal” social networks such as community groups where personal relationships exist (2013, p. 277). Decision-making is likely to occur within community groups because there is already a level of trust among those transferring information (Reimer & Brett, 2013, p. 285). Here, the identification of a problem is informed by evidence, but the decision is frequently based on the local knowledge.

Local leaders should be more involved in scientific knowledge development if information is going to be effective in rural communities. Allowing local leaders to help identify policy issues, develop strategies to mitigate these issues, and analyze and produce results will help to ensure that all stakeholders have the same vision going forward with the development of a policy (Reimer & Brett, 2013, p. 287). Therefore, greater collaboration needs to be achieved between all parties involved in policy-making, instead of widening the gap that exists between these communities, as collaboration is a key driver in evidence-based policy formulation (Reimer & Brett, 2013, p. 287).

The two communities metaphor attempts to explain the difficulties inherent in creating evidence-based policy. The idea is that two primary communities are involved in policy-making – scientists and politicians – who are separated by their language and approach to information and policy (Prewitt et al., 2012, p. 42). Like all simplifications, it is important to remember that this idea reveals broad truths about the situation while obscuring its many nuances.

Prewitt et al. describe the two different approaches to problem-solving as “research think” and “political think”; the former adds complexity, while the latter demands straightforward answers (2013, p. 43). Weiss’s enlightenment model reflects this binary model, where information use in practice serves to challenge ideas and shape perceptions in intangible ways. The incongruity of the two thinking processes perhaps leads to this situation: research evidence serves well to prompt and shape thought-processes, while it may be unsuited to the simplicity policy-makers expect when making decisions.

The two communities metaphor thus explains the challenges in mediating between these groups; but how then do we bridge the gap? One solution can be found in local policy-making: these individuals traditionally rely on informal social networks for information (Reimer & Brett, 2013, p. 275-277). In federal agencies, the most successful transference of scientific information into policy action also relies on trusted partnerships between policy-makers and scientists (Beddington, Mulgan, Rutter, Parker, & O’Brien, 2013, p. 46; Estabrooks, Thompson, Lovely, & Hofmeyer, 2005, p. 32; Strydom, Funk, Nienaber, Nortje, & Steyn, 2010, p. 1). Thus, mediation between researchers and policy-makers involves more than just the translation of scientific research into plain language, but should also include the construction of trust networks (Weiss, 1977, p. 15).

As a second option, consider Edward Rose, a political scientist who spent decades studying and writing about Northern Ireland, a divided society. He was invited to a discussion with President Bush to advise him on the situation in Iraq. In this instance he decided to use his three minutes by telling a parable (2008, p. 79). This method is highly subject to interpretation, but it prompts thought and allows the thinker to reach a decision he or she feels is his or her own. Here, the tailoring of communication modes creates evidence-informed over evidence-based policy.

It is important to take note of the various limitations of these arguments and the academic papers they are based on to have a full understanding of the situation. The concept of “faking influence” states that perhaps the weakness of the research or research institution was the reason the research was used in the first place (Neilson, 2001, p. 2). Indeed, it is important to remember that social science evidence may be subjective rather than objective, which leaves its use and the study of its use in policy difficult to assess with certainty.

Some of Weiss’s research drew from individuals in the mental health profession; thus we are making the assumption that her conclusions are transferable to other domains. However, the incorporation of social science into policy-making varies depending on how important a particular department or agency is to the agenda of the current government. Similarly, Prewitt et al. discuss the use of scientific information in policy, whereas some social science information can be largely qualitative in nature. Thus, we are assuming the same approach is applicable to the social science sphere, when this may not always be the case.

From Weiss we can conclude that, in practice, policy problems are informed by evidence, shaping how policymakers perceive the problem, but not necessarily based on evidence because they do not use it directly to make final policy decisions. Reimer & Brett agree with Weiss and believe that municipalities often do not have the expertise to make use of research; such information may inform the conceptualization of the problem, but final policy decisions are often based on informal social networks and personal connections rather than scientific evidence. The two communities metaphor offers an explanation for this situation: because the culture of the researcher invites complexity, while the culture of the policymaker prioritizes simplicity, evidence from research is more suited to shaping how policymakers will think about a problem, rather than how they will ultimately make a decision. Thus the enlightenment model of research information use in policy is applicable because of this natural alignment of problem-solving approach with specific stages in the policy-making process, leading to evidence-informed rather than evidence-based policy-making.