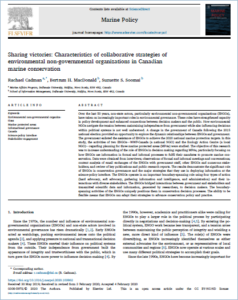 Scientists and policy makers alike are increasingly interested in participatory forms of governance. Recent research has found that when non-state actors are involved in the processes of environmental policy-making an opportunity is presented to strengthen the uptake of information, and improve the credibility, legitimacy and relevance of decisions.

Environmental non-governmental organizations (ENGOs) are an important, long-standing civil society group whose role in governance is evolving. As organizations that use, exchange, and communicate scientific information, ENGOs are major players in the larger collaborative ecosystem of state and non-state actors, which are increasingly engaged in “consensus oriented” environmental governance. In a new paper published in Marine Policy this month, EIUI team members Rachael Cadman, Bertrum MacDonald and Suzuette Soomai examine how ENGOs in Canada are adapting their practices to succeed in this new paradigm of governance.

The research examined the internal and external work of two Canadian ENGOs involved in marine conservation issues in order to develop a better understanding of how they engaged with government, other stakeholders, other ENGOs, and each other during the creation of three marine protected areas in Canada’s territorial waters.

The study found that ENGOs use several different types of actions, including hard and soft advocacy and information gathering, and they implement selective tactics to advance their agenda. A responsive institution with a suite of in-house expertise and a deep understanding of the science and politics involved in marine conservation decision-making is positioned to select and apply tactics strategically, based on the context. This distinctive capability allowed the ENGOs to pivot recently and play the roles of advocacy institutions, research groups, neutral mediators, or allies, depending on the opportunities for action and the perspective of nimble observers.

This study also shows that, as organizations whose stated objective is to improve conservation and environmental sustainability through fostering the uptake of scientific information into decision-making, ENGOs can be particularly effective when they pursue a role that is ostensibly “neutral,” namely that of a facilitator or boundary organization. In this capacity, ENGOs can act as translators of information among divergent stakeholders to improve communication and trust.

To learn more about the results of this study, read the paper published open access in Marine Policy.

Abstract: Over the last 50 years, non-state actors, particularly environmental non-governmental organizations (ENGOs), have taken on increasingly important roles in environmental governance. These roles have strengthened capacity in policy development and enhanced connections between decision makers and the public. How environmental NGOs navigate the tension between maintaining independence from government while also influencing decisions within political systems is not well understood. A change in the government of Canada following the 2015 national election provided an opportunity to explore the dynamic relationships between ENGOs and government. The government enlisted the assistance of ENGOs to achieve the 2020 national marine protection targets. In this study, the activities of two ENGOs—WWF-Canada (a national NGO) and the Ecology Action Centre (a local NGO)—regarding planning for three marine protected areas (MPAs) were studied. The objective of this research was to increase understanding of the role of ENGOs in decision making regarding MPAs, particularly focusing on how ENGOs use information in formal and informal processes to fulfil their mandates to promote marine conservation. Data were obtained from interviews; observations of formal and informal meetings and conversations; content analysis of email exchanges of the ENGOs with government staff, other ENGOs and numerous stakeholders; and review of key publications and public research reports. The results demonstrate the significant role of ENGOs in conservation governance and the major strategies that they use in deploying information at the science-policy interface. The ENGOs operate in an important boundary-spanning role using four types of action (hard advocacy, soft advocacy, gathering information and intelligence, and administration) and their interactions with diverse stakeholders. The ENGOs bridged interactions between government and stakeholders and transmitted scientific data and information, generated by researchers, to decision makers. The boundary spanning activities of the ENGOs uniquely positions them in conservation decision processes. The ability to be flexible means that ENGOs can adapt their strategies to advance conservation policy and practice.