In this post, Curtis Martin, an EIUI team member, reports on his Master of Marine Management research about the strategies that individual scientists and marine non-governmental organization communicators use to engage the public in conversations about scientific subjects. 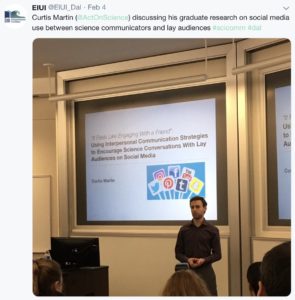 The internet and social media have dramatically changed the way we communicate with one another today. More than four billion people are connected online, with over half of the global population using social media, creating billions of posts each day across a multitude of platforms (www.internetlivestats.com). These numbers are staggering, but perhaps unsurprising in light of the unprecedented benefits that the internet provides for online communication, such as, breaking down geographic boundaries, facilitating near-instantaneous information exchanges, and providing greater access to information than any previous society has experienced. However, the last few years in particular have highlighted a clear juxtaposition between the benefits of online communication and pitfalls that seem to manifest at a rapidly increasing rate. Many conversations frequently and quickly devolve into polarized arguments riddled with anonymous trolling, a so-called “vocal minority” often uses the internet as a platform to feign widespread outrage, and perhaps most dangerously, internet users are able seek out “echo chambers” that reinforce their own beliefs regardless of reality. Such hazards have underscored the importance of information quality, the credibility of information sources, and the methods of information delivery, for trusted online communication.

It is crucial that we address the above pitfalls, as the internet and social media are now our primary information source. We use the internet to stay up-to-date on local and global events, remain informed on political developments, and, ultimately, to help us decide which government decisions and policies to support and why. In this context,howwe communicate online is more important now than ever before. This perspective is particularly significant in the case of communicating scientific information with public policy implications. How are we as citizens expected to influence government decisions in an informed manner without the proper information? How are we as citizens supposed to identify the “proper” information, when virtually any point of view can be supported with online information if we search hard enough? Alternatively, from the communicator perspective: how can scientific information be presented in a way that conveys quality and trust to those who need it, while still sharing information in a format that is accessible for everyone?

Researchers studying the science of science communication have come to at least one clear conclusion: communicators should not assume that members of the public lack knowledge and act like sponges, absorbing information in a passive manner (Salmon, Priestley & Goven, 2017). In other words, an approach that strictly aims to satisfy knowledge deficits is not sufficient. Instead, communicators need to share information in a deliberative manner, encouraging conversations with their audiences. Social media are significant in terms of a two-way communication model because they provide a relatively ubiquitous interface for conversations between communicators and the public. However, research shows that science communicators often have difficulty reaching the general public online, and instead are communicating mainly with people already knowledgeable on the subject (Alperin, Gomez, & Haustein, 2019; Ke, Ahn, & Sugimoto, 2017). This observation has led to calls for more innovative strategies to communicate science on social media (e.g., Galetti & Costa-Pereira, 2017).

This challenge motivated my Master’s research, which culminated in a report, titled, “‘It Feels Like Engaging With a Friend’: Using Interpersonal Communication Strategies to Encourage Science Conversations With Lay Audiences on Social Media” (Martin, 2019). In my study, I aimed to answer the following question: do particular social media strategies encourage two-way conversations between science communicators and public audiences online? To examine this question, I completed a comparison of two communicator groups who promoted science on Twitter and Instagram – one made up of four individual scientists (in North America and Europe) acting as popular science communicators using personal social media accounts, and the other made of up three environmental non-governmental organizations (NGOs, local, national, and international) using organization social media accounts. I completed this research in four main steps. First, I followed the Twitter and Instagram activity of the seven communicator accounts for one month, collecting all social media public posts and audience comments. This process allowed me to capture data on the strategies used by communicators, and the levels of audience engagement, particularly the number of comments and conversations on social media posts. Second, I interviewed the seven communicators to find out why they use (or avoid) particular social media strategies. Third, I surveyed audience members who were in conversations on any of the seven communicators’ posts over the month that data were collected. This latter step provided insight into why responding audience members – who I termed “conversationalists” – choose to participate in exchanges with communicators on social media. Finally, I analyzed the social media biographies of the conversationalists to determine whether communicators are engaging people outside of the scientific community.

What I found is very interesting. Starting with the audience analysis, I discovered that all seven communicators were conversing with a mix of scientific and non-scientific audiences alike. In other words, the communicators I studied – particularly the NGOs – are reaching audiences outside of the scientific community. However, the number of comments and conversations taking place is not equal between the communicator groups. The individual communicators received about 10 times more comments on their posts than the organizations (when controlling for number of followers). Additionally, more than six times as many users were in conversations with the individual communicators than with the organization communicators over the month. Moreover, a difference was also observed in social media engagement between the platforms used by communicators. On average, Instagram posts received over twenty times more comments than Twitter posts, and nearly eight times as many users participated in conversations with the seven communicators on Instagram than on Twitter.

What is causing the large discrepancy in social media engagement between the communicator groups? When I integrated all of my data – including the social media data, interviews, and survey responses – I discovered that the individual communicators are implementing five interpersonal communication strategies more effectively than the organization communicators, leading to greater audience engagement in conversations on social media.