From 5-8 February 2018, I was given the opportunity to attend and present a report on my research at the 2018 Social Coast Forum in Charleston, South Carolina. Organized by the United States National Estuarine Reserve Research Association, the Social Coast Forum draws coastal scientists and managers from across the U.S. and other countries every two years to discuss leading theories and best practices in managing the world’s coastlines. This blog post focusses on the plenary talk given by Tulane University geographer and historian Richard Campanella, titled “New Orleans as an Urban Social Coast.” In his talk, later turned into an article for The Atlantic magazine, Dr. Campanella described the city’s colonial legacy of watershed management that ultimately lead to its sinking and its vulnerability. He highlighted the risks of ignoring evidence in public policy decisions.

For much of its history, New Orleans has been a cultural melting pot, the area inhabited by Native Americans, and by Spanish, and French settlers before the newly independent U.S. took control of the territory during the Louisiana Purchase in 1803. More than a century earlier, the French claimed ownership over the region in the 1690s, eventually founding New Orleans in 1718. At that time, all the land upon which the city was to be situated sat at or above sea level, elevated as high as 10-15 feet in some places along the raised banks of the Mississippi River. It was there, neighbouring the thatched housing and shellfish middens of the native Mississippian people on the river’s north side, that the city was born 300 years ago. Navigating into New Orleans from the Gulf proved an early challenge for the French. Instead of battling the hard-flowing, sediment-laden Mississippi to enter the city from the south, the French relied on Native American guides to lead them to New Orleans from the east, through the delta’s treacherous “backswamp.” Before housing developments began to sprawl to the northeast of Old New Orleans in the mid-1900s, dense, untamed salt marsh characterized the area. The backswamp routinely absorbed overflow from the frequently flooded river, cycling water away from the city towards Lake Pontchartrain, the lowest point of elevation north of Mississippi during the colonial period. As Richard Campanella noted, New Orleanians hated the backswamp. In The Atlantic article, Campanella quoted an 1850s observer “unloading” on the marsh, to which disease and economic constraint was often attributed at the time:

This boiling fountain of death is one of the most dismal, low, and horrid places, on which the light of the sun ever shone. And yet there it lies under the influence of a tropical heat, belching up its poison and malaria … the dregs of the seven vials of wrath … covered with a yellow greenish scum.

In the late nineteenth century, civil planners and ambitious engineers began to idealize the draining of the reviled swamp. The city was expanding; a lucrative cotton gin industry and the nation’s largest antebellum era slave market had built New Orleans into one of the biggest and most powerful cities in the American South. In the interest of growth and industrial dominion, a series of well-intentioned if ill-fated hydroengineering decisions in the backswamp laid the groundwork for the below-sea-level New Orleans we know today.

Building on the French legacy of the ditches and streams used to drain the city during major rains or overflowing banks, by 1905 New Orleans had excavated more than 40 miles of canals, connected to several steam-powered pumping stations and thousands of pipelines to drain more than 5,000 cubic feet of water per second. Twenty years later, over 30,000 acres of marsh had been “reclaimed.” With the backswamp finally subjugated, the city swelled quickly into the low-lying land south of Lake Pontchartrain. But a funny thing happened when the swamp was finally drained. With the water that once saturated the estuary gone, large pockets of air were left hidden in the dried mud. Slowly, quietly, these empty pockets collapsed. The city’s drainage systems became increasingly more efficient, and as the land continued to dry, north New Orleans began to sink under its own weight. 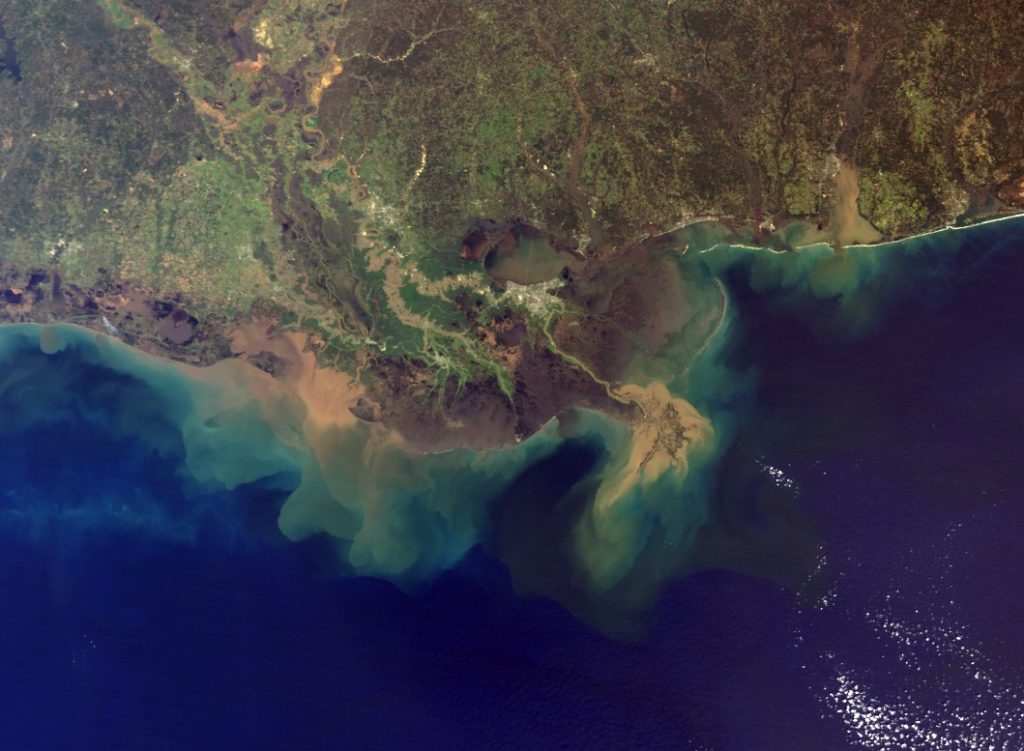 By the year 1960, more than 300,000 New Orleanians lived below sea level – over half the city. In some “lakefront” neighbourhoods in northeast wards, the architectural style began to change as well. For generations, houses in New Orleans were typically constructed without basements, using the flood-prone first floor for storage space and arranging living spaces on second and third floors. Not so in the latter half of the twentieth century, as many subdivisions built on land as much as 12 feet below sea level were left without these structural flood defences.

In 1965, the implications of a sunken city began to emerge for residents, as Hurricane Betsy ruptured levees and flooded thousands of homes. Five years later, rapidly-drained peat soils began to collapse under the weight of new subdivisions, and no less than eight houses exploded without warning in 1970. Crumbling slab foundations snapped subterranean gas lines, releasing volatile vapours into the buildings, and “all it took was a flicked light switch or a lit cigarette [for the house] to explode,” as Campanella reported.

While raised awareness and new building codes largely put a stop to exploding houses, the larger problem of subsidence remained unaddressed. Floodwalls were constructed to guard low-lying neighbourhoods. The protective infrastructure worked to a degree, but much of it was underfunded and subsequently under-designed. In 2005, Hurricane Katrina exposed the system’s woeful inadequacies, breaching the levees and flooding some areas with 12 feet of seawater in a matter of minutes, killing more than 1,800 people.

In the conclusion of his talk, and to set the tone for the Social Coast conference, Campanella reflected on the lessons of New Orleans. Over the past decade, the city has built a $14.5 billion storm defence system, known by locals as “The Wall,” which experts describe as underwhelming, if a step in the right direction. Campanella urged the audience to consider the city’s history; to consider the reliance on engineering and human ingenuity that originally caused New Orleans to subside, further cautioning against a reliance on these human-made mechanisms today. He discussed the Louisiana Coastal Protection and Restoration Authority’s plans to rebuild the remaining wetland, involving a diversion of sediment-heavy Mississippi River water onto the coastal plain in an effort to enable the salt marsh to grow faster than the sea can rise with climate change, providing the New Orleans’ structural barriers with a first line of defence.

Ultimately, said Campanella, these projects will be expensive, and they may not go far enough to protect a city beloved by residents in the face of increasing storm frequency and intensity in years to come. Learn from New Orleans, Campanella urged; not only from the adaptations that the city must endure to protect its residents, but also from the mistakes made in the past, to disrupt the natural, regulatory ecosystems that protect urban centres and support important wildlife across the United States. It is the job of the coastal manager, said Campanella, to ensure that these spaces are left “green with grass, blue with water, and absorptive in the face of heavy rainfall,” as he put it in his Atlantic article. Time will tell if we will learn from 300 years of experimentation in the Mississippi delta. Will research and three centuries of evidence inform public policy decisions?