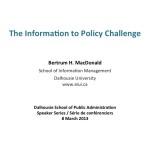 Bertrum MacDonald was featured as the first speaker in the series of public lectures offered by the Dalhousie School of Public Administration in collaboration with the Nova Scotia Federal Council. Addressing an audience of federal, provincial, and municipal decision makers in downtown Halifax on 8 March 2013, Dr. MacDonald spoke about the Information to Policy Challenge. He began by referring to a recent media report that the Nova Scotia Minister of Fisheries had requested scientific information to aid in deciding whether to open coastal fisheries to new species. This news report pointed to the role research evidence can fulfill in public policy decisions and also the complexity of the science-policy interface where numerous challenges can be encountered in the pathways information may take in policy decisions.

In briefly tracing the history of evidence-based policy making, Dr. MacDonald noted several critiques of this concept, which emphasize factors that may hinder use of the best available evidence. The claim that research evidence is only one factor involved in decision-making, for example, was stressed by Anne Glover, Chief Scientific Advisor to the European Commission. At the recent conference of the American Association for the Advancement of Science in Boston she stated: I know that our world is not just based on evidence, nor should it be. Nonetheless, when government leaders make policies that deviate from the available evidence, Dr. Glover wished these leaders would state that Awe accept the evidence, but for other reasons – political, social, economic reasons – we go in [a particular] direction. Much better dialogue with citizens would be stimulated if government leaders were as forthcoming as she suggested.

Dr. MacDonald drew on recent research on the science-policy interface and studies completed by the Environmental Information: Use and Influence (EIUI) research initiative to illustrate several inhibitors to the use of information in policy decisions: the technical language of research reports, problems associated with access to and awareness of information, distrust and the need for credible sources of information, misunderstanding of scientific uncertainty, scale mismatch in available evidence, and the institutional complexities in which policy decisions are made.

Recognition that challenges exist in the use of research evidence in policy decisions is an underlying motivation for current research of the EIUI initiative. The EIUI team is pursuing studies with governmental, intergovernmental, and non-governmental partners supported by a Partnership Development Grant from the Social Sciences and Humanities Research Council of Canada. Significant social, political, and environmental issues facing the world emphasize the urgent need for solutions to the challenges. As the AState of the Planet Declaration, approved at the Planet Under Pressure conference held in London (UK) in March 2012, proclaimed:

The challenges facing a planet under pressure demand a new approach to research that is more integrative, international and solutions-oriented. We need to link high-quality focused scientific research to new policy-relevant interdisciplinary efforts for global sustainability. This research must integrate across existing research programmes and disciplines, across all domains of research as well as local knowledge systems, across the North and South, and must be co-designed and implemented with input from governments, civil society, research funders, and the private sector.

The lecture concluded with discussion of two questions that Dr. MacDonald posed to the audience: 1) Was the research outlined in the lecture relevant to the work of public servants in attendance? and 2) How could the pathways of research information into policy development be tracked?