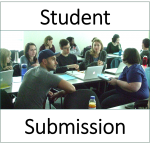 Social media plays a complex role in the development of evidence-based policy. Many have suggested that sites like Facebook and Twitter have created a new online public sphere, where open debate can lead to a strengthened democracy, improved community ties, and decision making (Merry, 2014). In reality, the effect of social media is not so clear. While social media plays an important role in information dissemination, online debate appears to be less common (Merry, 2014). Connections between like-minded groups may be improved through use of social media, however, the development of new ties is less likely (Cossins, 2014; Merry, 2014). While there are benefits to participating in online discussion, professionals may find that there is also a high level of risk (Climate of Fear, 2010).

Existing interpersonal networks play an important role in policy making (Oliver, Everett, Verma, & de Focht, 2012). In a network analysis of health policy groups in the U.K., Oliver et al. suggested that existing personal relationships influenced the flow of information and power to affect decision-making (2012). A survey was used to identify influential individuals through whom evidence could be channelled to affect policy. This network analysis found that personal relationships form more complex linkages than formal organizational hierarchies would suggest (2012). While this article does not involve social media directly, it is important to consider the implications of existing personal relationships, and the effect of these networks on social media and on communities. Although social media may help to improve communication and information sharing between existing networks, little evidence has yet been found to suggest that new networks with strong ties are developed online.

The Scientist recently published an article titled, “Setting the Record Straight,” which discusses how scientists interact on social media (Cossins, 2014). This article presents an optimistic outlook on the role of social media for the scientific community. It examines how the internet can speed up the process of peer review, and lead to corrections in publically reported research. Two recent examples of widely publicized scientific findings that later turned out to be inaccurate are considered. In January 2014, Nature published a scientific paper claiming that stem cells could be generated from blood soaked in an acid bath. If true, the discovery would have had a tremendous impact on stem cell research. However, many scientists were sceptical of the claim and attempted to reproduce the results with no success. These scientists turned to the internet and social media to criticize the original study and publicize their inability to repeat the results.

Similarly, in 2011 a report claimed that a bacterium had been discovered that used arsenic in its DNA rather than phosphorus. Other scientists challenged the conclusion and used social media to scrutinize and debunk the claim. While there were dissenting voices, Cossins (2014) presents this trend as mostly positive, and inevitable. In these examples, the scientific community used social media to accelerate the process of peer review. With these tools, the speed by which criticism can be disseminated can be dramatically increased, and scientists can receive feedback in near real time. Mistakes can be caught quickly and corrected. Improved communication between existing networks suggests that social media is a community strengthening tool, rather than a community building tool.

Literature on social media uses the term “interactivity” to refer to online debates and conversations; however, this term is often loosely defined (Merry, 2014). In a recent study, Merry defined interactivity as two-way communication (such as chat-like exchanges), or a public conversation between two or more users, where it is possible for others to join in the conversation (2014). In a case study focused on the 2010 Gulf of Mexico oil-spill, data analysis revealed that interactivity rates among individuals were relatively low. Instead, sites like Twitter were predominantly used to “broadcast” information, rather than to provide a forum for lively debate (2014).

While low interactivity rates may suggest that social media is not the tool for “cyberdemocracy” that some tout it to be, Merry acknowledges that this perspective is overly pessimistic (2014). Analysis of broadcast tweets is limited in revealing details about the public reception of information. It is difficult to analyze offline debate that may occur as a result of increased information sharing online. In order to develop a more comprehensive picture of public discussion, social media data should be studied in conjunction with survey data and data from other types of traditional media.

Benefits vs. Risks of Online Participation

There are a number of benefits to using social media as a tool for information dissemination. Namely, it is possible to reach a wide audience relatively quickly, with relatively little time investment (2014). In addition, information shared online may lead to discussion offline. However, a number of risk factors may also chill participation in online debate. For example, a 2010 Nature editorial, titled “Climate of Fear,” discusses the controversy that erupted after the release of emails by climate researchers at East Anglia University (“Climate of Fear,” 2010). This development led to the incident being popularly referred to as “Climategate.” The editorial expresses concern that under continuous criticism, scientists will lose the public’s trust.

While the “Climategate” emails showed errors, they also exhibited science working as it should, recognizing mistakes and improving. However, this view was lost in the media storm that alleged a cover-up by scientists (“Climate of fear,” 2010). This kind of negative reaction and unwarranted criticism risks silencing scientists who fear damage to their reputations. The Nature editorial highlights scientists’ unease that much of the online debate is emotionally driven, personal, and lacking in rigor (2010). From this perspective, increased scientific debate online will cause more harm than good. Similarly, Merry explores the idea that interactivity is time intensive for participants. In addition, a user may lose control of the message through debate (2014). Increased effort on individual responses may detract from a user’s ability to disseminate high volumes of information, which suggests that strategies aimed at spreading information may be more effective than engaging in interactivity.

It is clear that a number of tensions exist in the role(s) that social media plays in information flows and policymaking. While data analysis suggests that sites like Twitter can help to strengthen connections between like-minded organizations, there is little evidence that new, strong ties are developed by these means. In addition, while many assume that social media is a hotbed for online debate, true interactivity remains relatively low. Furthermore, while benefits to information sharing and participating in online discussion can occur, the risks may outweigh the benefits. As a result, discussion on social media may not be reaching its true potential. All of the articles considered in this blog post agree that it is inevitable that more evidence-based research will be presented and critiqued online and through social media. A Nature survey found, for example, that 1,589 of 3500 polled scientists and engineers regularly use ResearchGate (a social networking site for scientists and researchers to share papers, ask and answer questions, and find collaborators) (Cossins, 2014). It may be that social media has not yet realized its true potential as tool for “cyberdemocracy.” It may be that it is the wrong tool all together.