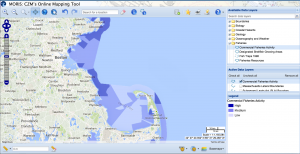 With over 10,000 km of coastline, Nova Scotia is undeniably a coastal province. Numerous activities occur within the coastal zone making it a highly valuable area for many Nova Scotians. For this reason, numerous stakeholders are involved with studying and making decisions about various aspects and activities that occur in the coastal zones around the province. Some of these activities include: fishing, tourism, coastal development, efforts to support coastal biodiversity, shipping, and economic development. A sizeable body of research, completed by a wide variety of stakeholders, is generated regarding how these activities affect the coastal zone. However, currently, Nova Scotia has no single data management tool to bring all its coastal and marine information together. Effects from activities that occur within the marine realm are not independent of one another. For example, a particular fishing area may overlap with a whale watching tour as well as a shipping lane. Therefore, collecting information generated from various coastal activities into a single management tool could increase communication among stakeholders, as well as, strengthen policy development processes.

Studies on the dissemination of information have found that managers and other information users place a high value on data visualization in decision-support systems. Furthermore, mapping tools have been specifically highlighted as useful in information dissemination. Digital coastal atlases are publicly available web-based interactive mapping tools, which display different layers of GIS-based data. Many jurisdictions worldwide have implemented coastal atlases (approximately 40 coastal atlases exist) and they are thought to be effective for information dissemination and planning, particularly in policy and decision-making contexts. Therefore, the aim of this research was to investigate the usefulness of coastal atlases as data management and decision support tools in jurisdictions where they have been implemented, i.e., are coastal atlases proving to be useful for data management as well as coastal policy and decision-making? Results from this research were expected to help inform the Nova Scotia government about whether to pursue the implementation of a provincial coastal atlas.

Initially, a literature review was conducted, which provided guidance for detailed semi-structured interviews. Four different digital coastal atlases in four jurisdictions were selected for this study: Maryland, Massachusetts, Scotland, and British Columbia. The atlases were selected based on recommendations from the Nova Scotia Department of Fisheries and Aquaculture (NSDFA), a governmental research partner to the Environmental Information: Use and Influence (EIUI) program, the availability of individuals who use the atlases for interviews, and because the atlases represent jurisdictions in Canada and other countries, thereby providing breadth to the study.

Interviews of approximately 45 minutes were completed with four coastal web atlas developers and 18 users. Atlas users were a combination of government and non-government employees. The users were asked questions about: their backgrounds, their use of atlases generally, their use of the atlases in decision-making contexts, their views about the atlas they used, and their recommendations regarding the ongoing development of the atlases. Atlas developers were involved with the creation, implementation, and maintenance of each of the four digital coastal atlases. They were asked questions about the rational for creating each atlas, data maintenance of the atlases, their observations about atlas users, and lessons they learned in building and maintaining the atlases. All of the interviews were audio recorded and then transcribed and thematically coded by hand. The analysis of the transcripts involved several tasks: immersion in the data, coding the data, creating categories from the coded data, and identification of key points or themes that were discussed in the report (Bazeley, 2007; Green et al., 2007; Ryan & Bernard, 2003)

At a general level, every user and developer interviewed found their respective coastal web atlas helpful for a variety of different reasons. One user stressed that it would be impossible to complete occupational responsibilities if the digital coastal atlas did not exist. All of the users were aware and used their respective atlases showing that coastal atlases are helpful in government, non-government, and consulting sectors. Furthermore, every user and developer stated that they would recommend their respective atlas to a variety of other users, which confirms that the atlases are helpful and the interviewees think others would find them useful as well.

This research aimed to determine whether coastal atlases are proving to be useful for data and information management, as well as coastal policy and decision-making. With regard to the former, all of the atlas users stated that their respective coastal web atlases allowed them to access a diverse range of information and twenty-two percent of these respondents stated that the atlases also enlightened them about information that they did not know previously existed or was accessible. One goal of information management is to collect and manage information from a variety of sources and distribute that information to one or more stakeholders. Similarly, the purpose of digital coastal atlases is to make many types of information accessible to wide user bases in easy to understand and visual formats (O’Dea et al., 2011). The responses of the participants in this study suggest that coastal web atlases are effective for managing large quantities of geographic data and information.

With reference to the question about whether coastal web atlases are useful in coastal policy and decision-making, the literature stated that they can be used to inform a wide variety of marine-related policies and decisions related to climate change, population pressures, coastal hazards, resource management, and hazard assessment (O’Dea et al., 2011; Wright et al., 2011). The interview findings mirrored the literature as many participants (50 percent) stated that using a coastal web atlas allowed them to be more confident about their decisions, as they were able to access a large volume of credible data in a centralized location. Thirty-eight percent of users believed that because the data in the coastal web atlases are publically available and thus transparent they were able to communicate their decision-making processes to the public more easily.

One indicator for determining if information is useful is whether it enables policy makers to achieve desired outcomes. The users were asked if a coastal atlas enhanced their ability to make decisions and almost all stated that the respective atlases allowed them to not only achieve their desired outcomes but the atlases actually enhanced their ability to make decisions. Their views on this point indicate that the information in the four coastal web atlases aided them in their work, particularly because using a coastal atlas increased their confidence in decision-making as noted above. A third of the users believed that the open access nature of the data increased transparency in decision-making and over half stated that the atlases enhanced their ability to make decisions more efficiently because it saved them time. In relation to barriers to policy-making, the users’ responses show that coastal web atlases help to overcome barriers many decision-makers face in making evidence-based decisions. Users were asked if they believed that the information in the atlases was both credible and current. Ninety-four percent of users believed that the information was current and 88 percent thought the information was credible, adding further evidence that coastal web atlases contain a wide variety as well as worthwhile information.

The evidence assembled in this study makes it clear that a digital coastal atlas could help to resolve the data management challenge found in Nova Scotia. The province can call on the experience of over 40 coastal web atlases globally, not just the four studied in this project (Rideout, 2014). Nonetheless, the four atlases provide ample evidence for Nova Scotia to proceed with creating a digital coastal atlas. Development and launch of a publically accessible coastal web atlas would provide a substantial decision support tool to aid numerous stakeholders managing coastal areas.

The following recommendations should be taken into consideration when planning the development of a coastal web atlas.

Concrete goals and priorities: When conceptualizing a major project like a coastal web atlas concrete goals and priorities should be outlined, namely, why the tool will be created, what will be gained from implementing a digital coastal atlas, what is the timeframe for completion and initial launch of the atlas, how will priorities be set with regard to the information that will be included in the tool, etc.

Understanding of audience/user group: As the developers interviewed in this study stressed, a clear understanding of the audience or users is crucial. The users of a coastal web atlas will ultimately decide if it is relevant. Therefore, it is important to determine their needs prior to implementing the tool. Their needs could be established by soliciting their input about the features or data they would like to see in the tool.

Comprehensive cost analysis: Funding is important for any management project, especially a long term initiative like a digital coastal atlas. Funding is required throughout the development and implementation of an atlas and maintenance also requires financial resources. A couple of the developers interviewed in this research implied that they are currently unable to update and maintain their respective atlases to the standards they prefer because of limited funding. Therefore, a comprehensive cost analysis, which includes long-term funding for maintenance and updates not just development and implementation of a coastal atlas, should be prepared.

Highly qualified atlas administrator/custodian: Lastly, a highly qualified administrator/data custodian should be chosen, as this person will be responsible for ensuring that the atlas continues to be updated/user-friendly. This individual can be tasked with addressing user concerns and comments, which will ensure that the atlas meets the objectives it was created for and responds to innovations as additional data is included and the underlying technology evolves.

This post is a summary of a Master of Marine Management research project report completed in December 2014. The full report is available at this link