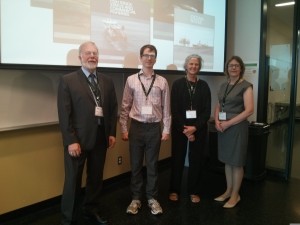 mbers of the Environmental Information: Use and Influence research team, James Ross and Bertrum MacDonald, presented the paper “The Generation and Regeneration of Scientific Literature: The Case of State of the Environment Reports” at the 23rd international conference of the Society for the History of Authorship, Reading, and Publishing in Montreal on 9 July. Presented in a session on “Generating and Regenerating Scientific Communication,” this paper drew on recent research by the EIUI program, particularly case studies of The 2009 State of Nova Scotia’s Coast Report, the State of the Gulf of Maine Report, and the State of the Scotian Shelf Report.

The paper was presented as part of a panel, along with Anne Ricculli and Cheryl Knott. Ricculli presented the paper “Revealing the ‘Coral Industry’: Science and Technology in the British Penny Periodicals, 1835–1845,” which argued that “penny magazines” played a crucial role in the dissemination of coral science and industry to the general public of Victorian England. Cheryl Knott presented “The Limits and Dynamics of Science Publishing,” exploring the publication and reception of two books, The Limits to Growth (1972) and Dynamics of Growth in a Finite World (1974).