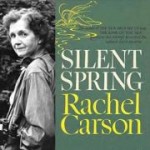 Silent Spring (1962), widely considered to be one of the most influential books of the 20th century, celebrates its 50th anniversary this year. It is believed that Carson’s work initiated the genre of publications describing new scientific knowledge on threats to the environment and largely conditioned the global attention to environmental issues. Carson’s work shows the great influence that a scientific publication can have on public policy. To mark this milestone, Peter Wells has completed a commentary “Celebrating the 50th Anniversary of Carson”.