On 4 February 1970, the oil tanker SS Arrow ran aground on the rocks of Chedabucto Bay on Nova Scotia’s east coast and four days later about two thirds of the 14,700 ton cargo of Bunker C oil spilled into the Bay. Recently, I collaborated with two Department of Fisheries and Oceans-Bedford Institute of Oceanography colleagues in researching and writing a short paper about this event and its significance to the onset of oil spill fate and effects research in Canada (Lee, Wells, & Gordon, 2020). 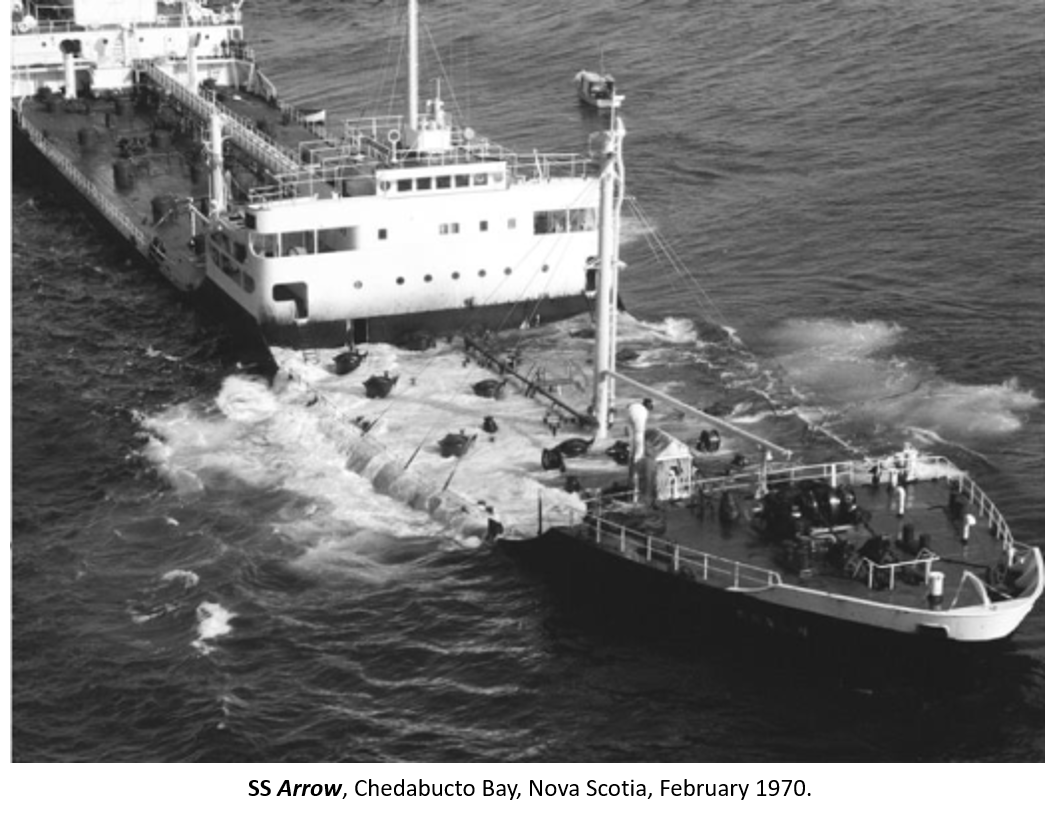 In relation to the EIUI research program, the paper states, “as a case study, the Arrow oil spill highlights the importance of science-based evidence in decision making for the most effective, oil spill remediation response option(s) for northern and Arctic waters.” The spill demonstrated the close interaction and cooperation at the time between the Department of Transport, military and coast guard officials charged with assessing the wreck and recovering as much of the oil as possible, and the marine scientists who were on the scene evaluating the impacts to fauna and flora, determining the extent of ecological damage, and making an assessment of whether oil spill dispersants would be effective or not at ameliorating the damage.

As a young Fisheries Research Board of Canada biologist at the time, working at the St. Andrews Biological Station, I and others were recruited to help in the impact evaluation. Working around the clock, and spending each day at sea sampling under frigid winter conditions, we had to summarize and deliver our findings quickly to those in charge. Consequently, I witnessed first-hand the daily morning and evening briefings, where the observations and facts were tabled, assessed, and decisions made on the spot as to the next round of actions.

Fortunately, there was a very strong and decisive leader. One important decision was made related to ameliorating the oil impacts. It was decided very early after the spill that the heavy oil was spreading by natural processes and that chemical dispersants would not be effective at aiding dispersal and protecting the beaches under such cold winter waters. Many samples of water, oil, and biota were collected for examination in our respective laboratories to study aspects of oil dispersal further.

Overall, this environmental crisis was a lesson for all involved on how well the information brokers (the scientists) and the decision makers (those charged with recovering as much of the oil as possible) could interact under emergency conditions, all doing their best with new information to reduce the environmental effects of the catastrophe. In the current age of ready access to information, approaches to risk assessment and risk management of such emergencies reflect the much faster interplay between science and policy than that of 50 years ago. As well, today’s situation with COVID 19 begs for a detailed comparative study of such environmental and health cases. This study would further enhance our understanding of critical factors that influence the acquisition, understanding, acceptance, and use of vital information by all of the actors in such emergency situations.