I love to solve puzzles. It has been a fascination of mine ever since I was a child, and my thoughts were and are consumed by new stratagem to resolve any puzzle placed before me. I am fortunate, I guess, that as time goes on, new and more challenging ones keep emerging. I came to Dalhousie University last year in the hope of finding my glory in fitting two pieces of a puzzle together, and enhance understanding. My chosen field of molluscs and public policy may seem odd, but they quickly converge on the subject of ocean acidification and its implications for human society. Unfortunately, tackling a problem through my Master of Environmental Studies thesis is very different from a classic Ravensburger casse-tête. For a traditional puzzle, I could begin by defining the edge, match like colours, or even cheat and use the picture on the box as a blueprint for the final product. In contrast, ocean acidification and its impact on Nova Scotian society has no clearly defined border, has many confusing and blurred patterns, and has no convenient box to help solve the final puzzle.

Upon advice from my peers, the first step seems to be to define what is known and why it is a problem. In brief, 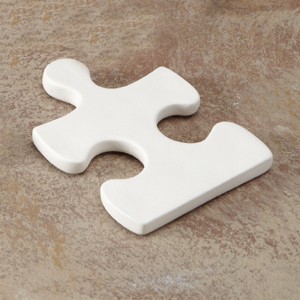 ocean acidification is understood to be a noticeable change in the acidity of the water as a result of increasing concentrations of atmospheric carbon dioxide. This shift alters many fundamentals of ocean chemistry, most importantly the presence of carbonate (CO32-) a prime building block of shells and other hard biological structures (Caldeira & Wickett, 2003; Gruber, 2011). The full consequences of this change are still unknown and are slowly being connected together to form a larger picture. What a tantalizing puzzle it is, with so many dimensions and possible avenues of inquiry! Like many others before me, I was initially drawn to understanding the picture that emerges in the centre. For instance, one avenue of investigation involves understanding how indicator species or indicator ecosystems will respond to these shifts (Barton, Hales, Waldbusser, Langdon, & Feely, 2012; Comeau et al., 2013; Comeau et al., 2009; Kurihara, Kato, & Ishimatsu, 2007). Others are investigating how changes in pH will alter general ocean chemistry around the world, or interact with other processes like climate change, or human population growth (Gruber, 2011). Some work is also examining past acidification events and how they may inform what is occurring right now (Hönisch, et al., 2012). All of these avenues are fascinating, but unfortunately require a lot of time and energy to figure out, and there are still a few missing pieces to complete the puzzle. The one I will be dealing with as part for my thesis is determining how to overcome the barriers of scale in communicating this phenomenon to local communities or industry. This is where the work from the Environmental Information: Use and Influence (EIUI) team will help immensely, since the response to ocean acidification will have to be initiated as the puzzle is pieced together.

The barrier of scale

Barriers to the flow of information are common, and in the case of ocean acidification, like other global phenomena, they centre on the issue of scale. Ocean acidification is currently understood at the global level, with large spatial variation and long time frames of change (on the order of a few centuries or more). However, international responses will necessarily occur at a sub-global level, even as small-scale as at a local community. This dichotomy ̶ between global and local community ̶ creates a scale information barrier, which effectively makes the problem, as currently articulated, distant and probably irrelevant to the everyday lives of the locals. The challenge is, therefore, to transform the problem in such a manner that it becomes relevant at all scales. Here in Nova Scotia this barrier can be quite obvious. So far, the research on ocean acidification has focused on the fragile ecosystems of the arctic (Comeau et al., 2009), the very species diverse tropical coral reef habitat (Comeau et al., 2013), or on the variation along the entire length of the Atlantic, Pacific, or Indian oceans. This province, though very closely linked with the ocean, has neither of these two major ecosystems, and is but a small data-point along the Atlantic transect. Therefore, the impetus for my research on ocean acidification is to define the puzzle boundary so that the province will be able to “see” the effects of ocean acidification, and how they fit in the global picture.

A few obstacles need to be overcome. The first obvious step is to transform the global data to align with smaller geographic and temporal scales (Nutley, Walter & Davies, 2007; Watson, 2005). In essence, this means changing the information on ocean acidification from hundreds of kilometers and many centuries, to hundreds of metres and a few years. So far, the research has targeted key organisms like corals, coccolithophores, pteropods, mussels, or oysters (Gruber, 2011). Such studies focused on the extremes that would cause major increases in mortality in shellfish populations. These various endpoints are important to know; however, in many cases they may only occur in two to three hundred years depending on which carbon dioxide emission scenario is chosen. Initiating change at a local scale requires a combination of information about local species (like the oysters and blue mussels) and changes that are likely to occur over the next century. 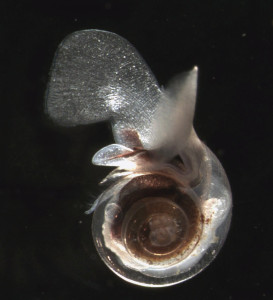 Once the information is ready to be shared, it will necessarily have to meander through communication networks and reach the intended audience. In the case of ocean acidification, the pathway is non-linear and multi-directional (Ascher, Steelman & Healy, 2010). That is, communication can go back and forth between two individuals or organisations, and many broadcasters of information on the subject. The risk in all of this activity is the production of a distorted message, which could slow down the uptake. A non-linear system isn’t unique to this case; it is typical of many global phenomena. For instance, climate change could suffer from a similar problem, and to reduce the potential confusion the UN and world scientists formed the Intergovernmental Panel on Climate Change (IPCC) as the main “official” source of information on the subject. The IPCC helped define the terminology and aimed to provide knowledge on climate change directly to the nations of the world (Watson, 2005).

Organisations like the IPCC may help in controlling the message, but any non-linear system depends on establishing and maintaining trust (Nutley, Walter & Davies, 2007). Because there can potentially be multiple sources with different messages, the individuals receiving information seek trusted sources (McNie, 2007). This situation implies, of course, the need to establish a coherent body of knowledge, but also a need to establish and maintain communication channels with the intended targets. All too often the second part is missed, which reduces the trust placed in a source no matter how sound the science may be. Knowing the intended audience is key to communicating the message effectively; unfortunately, the message about ocean acidification is complex and uninteresting. In this case, establishing trust a priori will be essential to help accelerate the flow of information as more is pieced together during the next few decades.

They say that beauty lies in the eye of the beholder, and the same can be said about useful information. The scientific community doesn’t lack information; in fact, there seems to be an overabundance of it. However, how much of this body of knowledge is actually useful? Out of interest, many Nova Scotians may want to know more about what is happening to the globe, but when the time comes to do something about it, the first step is less obvious than it should be. Useful information is also subjective in nature, and depends on the ability a person or community to respond (Ascher, Steelman & Healy, 2010; Watson, 2005). For instance, the group working on marine protected areas may find particular pieces of information more useful than a shellfish aquaculturist. Therefore, in addition to establishing trust, one must also think of communicating information that will be of interest or of use to the recipient.

My father once mentioned when I was young, that no matter where I wound up in life, I must never forget the importance of effective communication. In the case of ocean acidification and my thesis I will take this advice to heart. A large body of information about the subject exists, but few have started to refine it in a form that is useable by Nova Scotians. Overcoming the barriers of scale helps to fit a few crucial edge pieces together, which will help onlookers focus on the centre of the puzzle. My research on ocean acidification aims to help contextualise the phenomena to the province, and in doing so will help open the channels of communication and define what aspects of ocean acidification will be important in the next century.