Recently, I experienced a week I will not soon forget. Along with 11 other graduate students, I was given the opportunity to attend the science-policy workshop Science Outside the Lab North (SOtL) in Ottawa and Montreal. Originating as a Washington D.C.-based program, Matthew Harsh and Eric Kennedy brought SOtL to Canada in 2016, and this year the number of applicants and attendees grew significantly. An associate professor at Concordia University in Montreal, Matt focusses his research on how to involve graduate students in forming science-policy futures (and is doing a good job so far), and Eric is studying Canadian wildfire policy for his PhD at Arizona State University. SOtL is an intensive, weeklong course introducing an interdisciplinary group of students from across the country (see biographies at www.sotlnorth.ca) to a number of major figures at the nexus of science and policy in Canada. During the week, we met representatives from several organizations, institutions, and government agencies, including but not limited to: Evidence for Democracy, Global Affairs Canada, the Canadian Centre for Architecture, l’Université du Québec à Montréal, Genome Canada, the Canadian Science and Technology Secretariat, the Tri-Council Research Agencies, the Canadian Food Inspection Agency, the Montreal Science Centre, Environment and Climate Change Canada, Fonds de Recherche du Québec, and Natural Resources Canada.

The workshop began on Saturday evening at the Clocktower Brewery, not far from where the hometown Senators went into overtime in a second-round Stanley Cup playoff against the New York Rangers. Red hockey sweaters complemented the cold “Vimy” amber beer served in celebration of Canada’s 150th birthday. At a long table, twelve self-proclaimed “science-policy nerds” and two like-minded SOtL organizers tried to figure out the cause of the excitement, and get to know one another. The fast-paced schedule at SOtL meant the latter process did not take long. 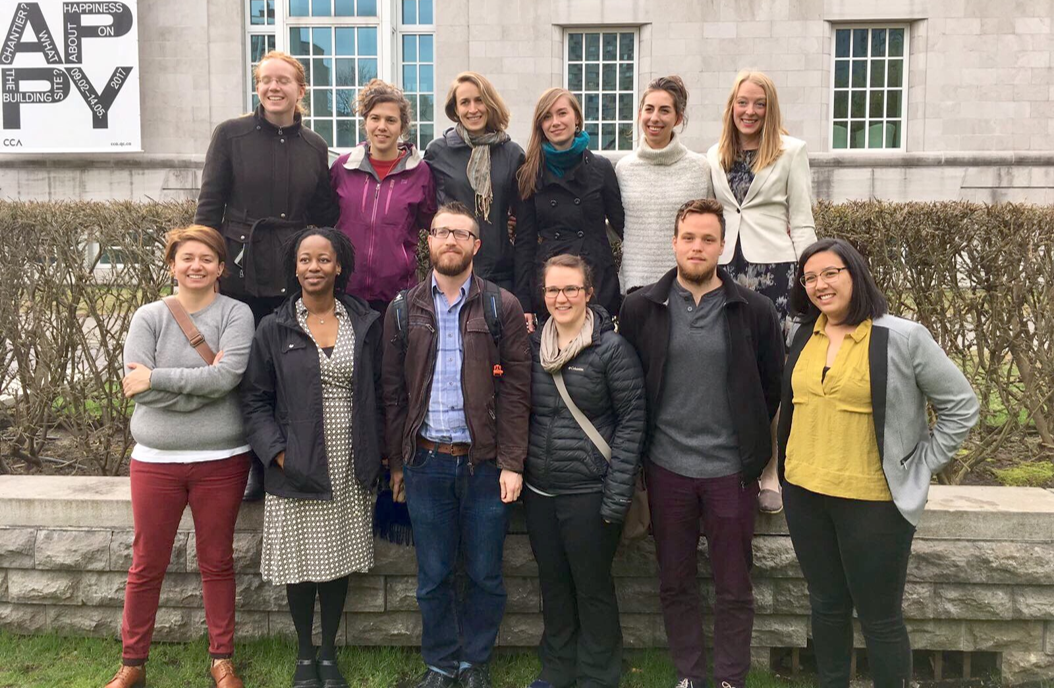 SOtL 2017 student cohort, outside the Canadian Centre for Architecture, Montreal

Eric and Matt referred to the first day as “boot camp.” While nobody did push-ups or wind sprints, we did go deep into the nuts and bolts of policy formation in Canada, including the history of domestic science-policy and “policies for science.” We discussed assigned readings by leading thinkers on the science-policy interface in Canada and abroad, such as Daniel Sarewitz, Heather Douglas, Remi Quirion, and others. We explored topics as wide-ranging as the American scientist Vannevar Bush’s 1960s concept of value-free science, the legacy of Canada’s early nuclear energy program, and the cultural roots of Quebec’s foray into a science-policy divergent from the rest of the country. Mostly, we bombarded the organizers with knowledge-testing questions about how policy develops in Canada, and science’s role in that process. Formerly a faculty member at the University of Pittsburgh, Matt also provided insight into the American system and the use of science as a policy instrument there.

Monday, with opening meetings with Ottawa’s science-policy insiders, was the first of five days in which we travelled to federal and provincial policy offices in Ottawa and Montreal to talk with experts. Through the week we explored science communication, changing governments, research funding policies, First Nations rights, non-Western ontologies, environmental politics, science advisory councils, universities and “siloed disciplinarians,” cross-agency co-operations (or lack-thereof), public engagement in policy and science, aversion to experts, science in industry, open research, and “Science 2.0,” aka the many potential futures for Canadian science, and its connection to policy.

At each meeting, to allow for reporting, Chatham House Rules were applied to ensure that any statements would not be attributed to specific individuals or organizations. This arrangement allowed speakers to discuss freely their thoughts and feelings about the federal policy machine and its challenges. Speakers were exceptionally accommodating, often remaining after their committed time to answer extra questions and share contact information.

On occasion, speakers were caught off-guard by unexpected lines of inquiry. One of the many exciting concepts of the workshop was the deliberate attempt to assemble a highly diverse set of graduate students for whom the impact of science on policy and vice versa falls in very different, often very personal ways. Given the opportunity to meet with an equally varied group of speakers meant we could test particular questions across organizational boundaries, pulling many levers on the same topical switchboard, so-to-speak, hoping to increase our understanding about who had put significant time and thought into particular issues, or who had not, and why. For example, one student was especially interested in the conversations within government about the use of the evolving, largely unregulated gene-editing technologies. With recent advances, potential applications are beginning to emerge in a myriad of scientific disciplines and commercial enterprises. Several versions of the same question were posed to representatives of different groups within and outside of government: who is talking about gene-editing in the federal government, and what is being said? Each representative responded differently, and as a result, we were able to gain a general understanding about current thinking on gene-editing regulations and existing awareness-gaps. While knowledge on such a specialized and relatively new topic is bound to vary, it was clear that some government representatives – who the interested student imagined as having a direct interest in the emergence of gene-editing technologies – did not see this subject as part of their mandate. By contrast, a non-profit group in Montreal, whose mission involves bridging the gap between science, industry, and government to encourage evidence-based policy, invited us to an upcoming symposium that was to explore ideas about who has the right to “own” an individual’s DNA, including discussion on the positive potential for gene-editing for society, and where to draw boundaries. This topic was one of many that enlivened the daily sessions.

As much as possible, each student was given an opportunity to raise questions in each session. This method promoted rich conversations since different perspectives were brought to the table. Moreover, the opportunity to meet socially at day’s end was every bit as valuable as the time with speakers, where we could make sense of what had been said, pull fragments of conversations together, and begin to draw some broad-stroke conclusions about the major barriers in crafting and implementing science-based policy in Canada. The opportunity to share stories and contextualize information with personal examples across many fields of study, and to build on colleagues’ ideas, all contributed to peer-to-peer learning that was absolutely energizing. The interdisciplinary model also seemed to be valued by the speakers, as they were able to solicit ideas from a diverse group of policy-interested researchers. SOtL was an exercise in exchanging philosophies across disciplines, professional occupations, and geographical divides. By the end of the week, the efficacy of the process was clear. The workshop put forth a model to initiate robust, multi-generational discussion about how to implement sound science-policy for Canada’s future.

To learn more about several of the themes of the workshop, be sure to check out Part II on Decision-Making!