It is not a common occurrence to stand up and chant positive affirmations at an international scientific conference in the hope of addressing today’s climate change crisis. However, this tactic happened multiple times over the course of the National Council on Science and the Environment (NCSE) 2020 conference held in Washington, D.C., 6-9 January 2020. Keynote speakers, including Dr. Freeman Hrabowski, president of University of Maryland, Baltimore County, and Shirlee Zane, Sonoma County, California Supervisor, ended their talks with uplifting mantras (e.g., “I will practice empathy!”) called out by all attendees in the room. While unexpected, this practice set the tone for the duration of the conference. Often, environmental conferences are characterized by worrying statistics and looming deadlines for mitigation responses by scientists and policymakers. The NCSE conference was different. While speakers presented many calls to action and an underlying sense of urgency pervaded the sessions, the overarching themes of the conference were focused more on the value of connectivity, empowerment, and curiosity, as well as the need for greater diversity and improved communication of science. Solution-based policies and evidence-based decision making were emphasized heavily each day. 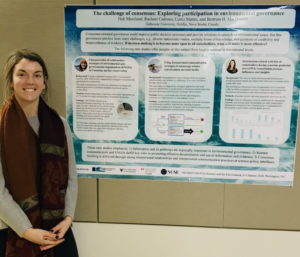 I attended this conference to present the poster “The Challenge of Consensus: Exploring Participation in Environmental Governance,” co-authored with Rachael Cadman, Curtis Martin, and Bertrum MacDonald (see abstract below). Despite missing part of the conference due to weather conditions in Canada, which preventing arriving in the American capital as planned, I came away with several key insights that I felt summarized the overall theme of the week.

Empowerment is key to effective science communication: Freeman Hrabowski stated that scientists frequently face a challenge in effectively communicating to lay audiences that the work they pursue does matter. The key to this challenge, Hrabowski stated, is to empower scientists with communication skills and support those entering the field, rather than “weeding them out” in first year university courses.

Today’s youth are not tokens in the climate crisis; they are stakeholders: Many speakers, most notably Xiye Bastida, a youth activist from New York City, stressed the need for intergenerational cooperation. Bastida argued that while significant youth mobilization has developed in the fight against climate change, several years will pass before these young activists obtain academic degrees and jobs necessary to enter the policy arena and wield “legitimate” decision-making power. Thus, the older generations need to take younger generations seriously and work more collaboratively moving forward now.

Scientific storytelling is a powerful skill: Laura Guertin, a professor in Earth Sciences at Penn State University, highlighted the potential of using narratives to tell compelling stories about scientific issues. Guertin stressed the importance of finding a topic that one is passionate about in order to create a dynamic story. In practice, Guertin gives her students the freedom to choose a scientific topic to write about, in order to produce more engaging work.

Vulnerability and resiliency can strengthen existing policies: Shirlee Zane delivered an emotional keynote address in which she described three large natural disasters that wreaked havoc in Sonoma County, California, while she was in office: two fires and a flood. She described the lack of preparedness that the local government faced before the first fire, and the devastation that resulted. However, knowing that the county would likely face more calamities in the future, Zane knew it was time to act. She incorporated resiliency strategies into local policies, including erosion control, early warning signal systems, and vegetation mapping to highlight areas of vulnerability in the county. By learning from past mistakes, and using evidence from both natural and social sciences, she both restored the trust of county residents and strengthened the entire community.

Reframing climate change can engage neglected audiences: Joelle Novey, director of the Washington, DC-based non-profit organization, Interfaith Power and Light, reflected on her fascinating work of discussing climate change with different faith communities in the D.C. and surrounding area. A magna cum laude gradate of Harvard University, Novey described successes by portraying global warming as a moral issue, rather than an argument of science versus religion. Novey ensures she is not shut out by diverse faith communities by appealing to their personal beliefs and values, and establishing a sense of trust and respect with the people with whom she speaks. Through these techniques, she reaches a broader community than other academics who may become siloed in their own academic environments.

As I reflected on the NCSE conference, what struck me most was the need to be creative with climate change solutions and to examine critically the systems in which we have been working thus far, allowing for the notion that it might be necessary to alter both the solutions and the systems. Continuing with the status quo is no longer an option for solving the climate crisis; that much is known. In the words of Xiye Bastida, “taking care of the environment is not a side hobby.” It is time now for us to embrace youth, curiosity, ingenuity, diversity, and vulnerability to help the world deal with this significant problem. How one pursues this objective is up to each individual. It might be finding a mentor, taking part in a climate strike, or chanting a positive affirmation to oneself before going to work. Every action counts. 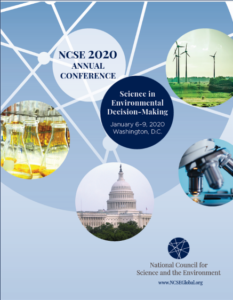 Poster abstract: Consensus-oriented environmental governance has received increasing attention recently from researchers, environmental managers, and decision makers because it is believed that participation by all relevant stakeholders will improve decision making and environmental outcomes. However, adopting this governance model is challenging, in part because the credibility and trustworthiness of evidence is questioned when many participants are involved. If decision-making is to become more open to stakeholders and the public generally, how can it be made more effective? This poster draws on three case studies at local, national, and international levels to suggest strategies to address some of the challenges.

Because of their ability to build capacity in policy development and increase the uptake of evidence, environmental non-governmental organizations (ENGOs) have become important in governance processes. A case study about the involvement of ENGOs in decisions regarding marine protected areas (MPAs) in Canada shows that ENGOs fulfill various roles in facilitating the flow of information in decision processes. In particular, they function as boundary organizations between government, stakeholders, and the public.

Social media are powerful tools for providing citizens with information to participate in governance processes. However, two-way conversations between science communicators and the public are difficult to encourage, and citizens may struggle to determine the credibility of information in social media. The second study about individual and NGO science communicators shows that the application of interpersonal strategies help to establish relationships with audiences, encourage two-way conversations, and build trust in information, resulting in effective science communication.

Governments often employ consultation processes to reach consensus regarding environmental conservation. In a third study, about the establishment of a coastal MPA in Canada, stakeholder involvement is particularly important. By examining the information-related activities of members of an advisory committee (their preferences for information sources and channels, how they reconcile conflicting information or misinformation, and their criteria for identifying trustworthy information) this study highlights how governments can maintain credibility and transparency while strengthening collaboration in decision-making.

Together, these three studies underline the importance of reciprocal learning and the necessity of engaging multiple forms of knowledge to address complex environmental issues. By uncovering details of decision activities, the results illustrate how hurdles in consensus-oriented environmental governance can be resolved.