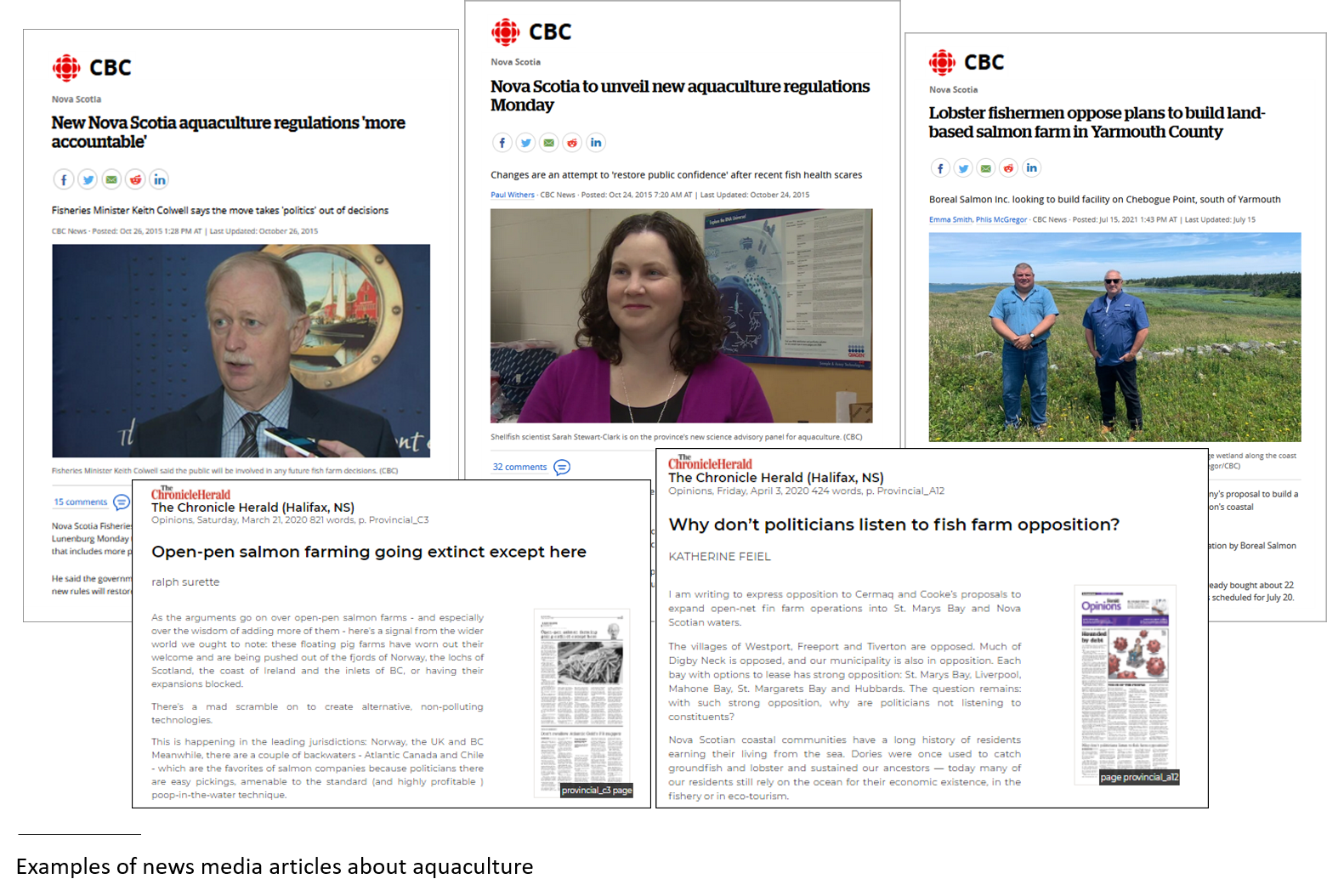 The news media can be very influential in decision-making processes. Traditional news media are widely used sources for information consumption and they have the means and reach to inform and shape public opinion. Although the news media are often open to political, social, and cultural biases and might not paint the entire picture on a subject accurately or completely, the discourse published in these information outlets can still be useful for understanding public perceptions and by extension identifying influences on decision-making processes. The context of a news source also factors into the equation. Provincial and neighbourhood news media report on localized knowledge and impressions shared by communities are, therefore, informative evidence for developing an understanding of public opinions. Discourse reported in these media can also reveal the actors and stakeholders involved in the conversations. Especially with contentious issues, such as aquaculture, where the subject is fraught with uncertainties and multiple factors and actors are involved, effective communication, transparency, and accountability become critically important for decision processes and in developing resolutions to misunderstanding and conflicts.

Aquaculture is one of the fastest-growing industries in the food-producing sector (Anderson et al., 2017; Asche et al., 2015). It is widely argued and accepted that wild-catch fisheries have reached their maximum potential and do not have the capacity to sustain the growing demand for seafood (Hynes et al., 2018). Aquaculture is being presented as an alternative with the potential of meeting the needs of the rising global population (Irwin et al., 2021). Despite the rapid growth of aquaculture farms, their expansion has generated considerable controversy and public opposition globally, including in Canada (Flaherty et al., 2019). However, concerns about aquaculture in Canada are focused more on open net-pen finfish farming (Grant et al., 2016) than other aquatic species. Open-net-pen fish farming is the practice of farming fish in large cages suspended in the ocean, which are primarily used for growing salmon and trout (Ecology Action Center, n.d.).

In a study I conducted in collaboration with the Ecology Action Centre in Halifax, discourse reported in the news media during 2014-2020 was analyzed to determine public sentiments and opinions towards the expansion of open net-pen aquaculture in Nova Scotia. Provincial and national news sources were included in this study. Factors ranging from environmental impact to employment benefits were brought up. Native populations of Atlantic salmon are critically endangered, and the risk of escape of farmed salmon competing with vulnerable wild stocks or genetically altering them through interbreeding has been one of the major concerns (Atlantic Salmon Federation, n.d.). Nova Scotia relies heavily on the flourishing American lobster industry and the incursion of open net-pen farming in the shared coastal waters has created significant opposition and questions about the co-existence of these two diverse farming practices (Grant et al., 2016; Loucks et al., 2014). Some experts also raised concerns about increased lobster mortality due to the pesticides used to treat sea lice infestations in open-net farms (Wiber et al., 2012). Open net-pen aquaculture remains a contentious issue in Nova Scotia (Smith & McGregor, 2021).

Content analysis was conducted on the articles (news reports, opinion pieces, and letters to the editor) published during the six-year study period. A combined qualitative and quantitative approach was applied to identify and quantify the emerging themes. In addition to the themes, various actors who played central roles in the public discourse were identified. The stakeholders, their contributions, and their relationships with the central topic of open net-pen aquaculture were analyzed by categorizing them into five broad categories, namely, government, aquaculture industries, communities, researchers, and advocacy groups including citizen groups and environmental NGOs.

The discourse analysis revealed that the concerns regarding the open net-pen salmon farming are impact-driven, i.e., the effect of the aquaculture practice on the communities and environment. Environmental impacts were a prominent focus, particularly, the impact on lobster and wild salmon populations. The media reports included numerous accounts of community members expressing distress over the potential risk of pesticides, transfer of diseases, and infestations like sea lice to wild salmon, and threats to an already dwindling natural population. Other environmental concerns, such as debris from net farms, pollution from fish farm waste, and higher toxic levels in the sea bottom from the chemicals used in the fish food, were also reported.

Although employment benefits are noted as one of the greater economic advantages brought on by net-pen farming, opposing voices claim they are overrated. The provincial government pointed out the benefits of income from the tax revenue generated and employment opportunities in the rural communities. Many community members believed that the economic aspects of open pen farming are overstated, and the jobs created by this industry are far fewer compared to the jobs currently generated by the lobster and other aquaculture farming industries. Net-pen farming’s impacts on the province’s tourism, property values, and fishing grounds are also highlighted amongst other concerns. Many comments on the logistical issues focused on the infrastructure challenges of establishing net pens on the Nova Scotian coastline. Multiple statements noted Nova Scotia’s less than ideal coastal geography, which makes it unsuitable to house open net-pen farms. Shallow bays and weak currents make it difficult to set up fish farms and they accelerate waste accumulation.

The analysis of the data in this study illuminated the roles of various stakeholders in the public discourse of open net-pen aquaculture issues in Nova Scotia. Although the provincial government, local coastal communities, and the members of aquaculture industries were at the forefront of the debate, other actors, such as citizen groups, eNGOs, and researchers also played a role in expressing views on the topic. The provincial government and the industry were framed as proponents of the expansion of the open net-pen industry, while local communities were cast either as proponents or opponents according to their positions concerning the open net farming reported in the media articles. This study also found open letters and opinion pieces useful for determining the emotions and impressions of the authors, many of whom are community members and deeply engaged in the open net-pen aquaculture discussion. Although these sources could be assumed to present biased points of view and might not necessarily represent the opinion of the community as a whole, they still are informative evidence for gaining an understanding of public opinions.

This study highlighted the complex, multifaceted, and controversial nature of the ocean-based aquaculture discourse. Multiple context-dependent variables like biological, environmental, and socio-economic factors need to be considered while assessing the effect of the open net-pens in a given location. The findings of the content analysis shed light on various areas of concerns that members of Nova Scotian communities have raised about the governmental authorities and regulatory processes implemented in the aquaculture industry in the province. Some members of the public claimed there was a lack of public consultation and transparency during the approval processes. Public concern about the regulatory processes for the approval of leasing sites to various aquaculture companies was also reported in the media. These observations may not be representative of the whole community, however; nonetheless they provide glimpses into the potential gaps in communication that can be present between the public and the governmental bodies. The public’s impressions of the social, economic, and environmental dimensions of aquaculture can exert a substantial influence on the industry’s ability to retain and/or expand its access to production sites (Chu et al. 2010; Osmundsen & Olsen, 2017). However, to achieve two-way communication, the community’s concerns and opinions need to be considered, which is one of the frequent complaints that members of the coastal communities of Nova Scotia had about the provincial government.

Further studies could expand on this analysis by conducting surveys to examine more comprehensively the public sentiment and opinions regarding how to improve communication and foster trust among the communities. The impacts of the open net-pen aquaculture are not fully understood and are still being explored; however, this lack of data has created a sense of uncertainty about the actual and perceived risks of aquaculture. Hence, there is an opportunity for research, collaboration, and communication to encourage informed discussion and decision-making about aquaculture initiatives. As with other environmental issues, local and localized knowledge is needed to inform decisions at community levels (Hill, 2021). Effective engagement of local communities in decision processes includes listening to the diversity of individual and stakeholder voices.