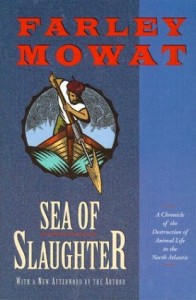 Last week’s Coastal Zone Canada Conference 2014 drew attention to one of the most pressing issues of our time: the health of the world’s oceans. In May of 2014, the oceans lost a valuable ally with the passing of Farley Mowat, a man who spent much of his prolific writing career raising awareness for environmental concerns. One of his lesser known works, Sea of Slaughter (1984), was a treatise against humanity’s destructive treatment of the fragile marine ecosystems.

Farley Mowat was a writer for whom the “truth” always came before the facts. Although widely popular in Canada and abroad, his writing has faced criticism regarding its scientific or historical accuracy. Having been conferred the dubious moniker of “Hardly Know-it” by some critics, Mowat was perhaps better understood as a non-fiction writer who never let facts get in the way of a good story. He wrote that “having early eschewed the purely factual approach, I was not willing to go to the other extreme and take the easy way out by writing fiction. My métier lay somewhere in between what was then a grey void between fact and fiction” (Mowat, 1974, as cited in McGoogan, 2011). It was in this grey void that he published over 40 novels in a career spanning six decades. Farley Mowat passed away on May 6th, 2014 in Port Hope, Ontario.

Mowat’s passion for the natural world long preceded his writing career. As a lonely, only child, he often sought the company of animals for companionship. At the age of 15, he accompanied his great-uncle, ornithologist Frank Farley, on a six-week expedition to study arctic birds on the west coast of the Hudson Bay. It was during these formative years that Mowat developed an ardent love of nature that would act as a pervading theme throughout his numerous works.

When Canada declared war against Germany in 1939, an 18 year old Farley Mowat joined the Hastings and Prince Edward Regiment as a 2nd lieutenant. The horrors he witnessed while deployed in fascist Italy cultivated a dim view of humanity which stood in contrast to the purity of the natural environment. The idea of humans possessing the capacity to inflict terrible harm upon themselves, other species, and the world around them formed a counterpart to his naturalist views and acted as a central theme in major works like People of the Deer (1952), Never Cry Wolf (1963), and A Whale for the Killing (1972).

Although later charged with misrepresenting the facts, People of the Deer offered a scathing indictment of the Canadian government’s mistreatment of the Inuit peoples that “did more to raise awareness about the North than anyone, and more to convince people that a debate was necessary” (King, 2002, as cited in McGoogan, 2011). Mowat’s style of bleeding fact with fiction was very much ahead of his time. His strength as a writer was drawn from the ability to dramatize issues in a way that appealed to the emotions of his audience. However, the public’s inclination toward sensationalism resulted in some of his more serious (and rigorously researched) works to be largely overlooked.

This outcome is illustrated by the sad fate of Mowat’s self-proclaimed favourite work, Sea of Slaughter. This “angry, articulate howl of protest” (Ellis, 2000) decries the wanton destruction of animal life in the North Atlantic and provides an “exhaustive record of man’s inhuman attitude toward life on Earth” (Martin, 2014). In his own words, the book records “what we have accomplished in one special region during 500 years of tenure as the most lethal animal ever to have appeared upon this wasting planet” (McGoogan, 2011). His hope was that the novel would “help to change our attitudes and modify our future activities so that we do not become the ultimate destroyers of the living world” (2011).

Unfortunately, Sea of Slaughter did not achieve critical or public success and his dire warnings fell on the deaf ears of a nation. Mowat lamented that the book was his greatest failure because “he gave the readers too much ‘truth’ and overloaded the narrative” (Martin, 2014). In the forward to the newest edition, notable scientist and environmental advocate, David Suzuki, writes that “[s]ince the Sea of Slaughter first appeared, the northern cod fishery has collapsed, ending five centuries of Newfoundland culture built on cod. The collapse could have been avoided had we heeded Mowat’s prescient warning” (Suzuki, 2003, p. x). Suzuki also argues that “the message of Sea of Slaughter is even more relevant and urgent today: the appalling exploitation of Earth’s resources must stop” (p. x).

Whether a more dramatic and less factual Sea of Slaughter could have raised awareness about the plight of the North Atlantic as People of the Deer did for First Nations living in the north is impossible to say, and also not particularly important. What is important is that right up until his passing at 92, Farley Mowat never let important issues, environmental or otherwise, reside in obscurity. His works gave voice to atrocities committed against the natural world at a time when environmental concerns were not at the forefront of national consciousness. Throughout his career, through criticism and controversy, he doggedly wrote on, hammering away at his typewriter, a gruff voice of reason bellowing out from the north. He will be sorely missed.

save animals, nature and First Nations. The Globe and Mail. Retrieved from

McGoogan, K. (May, 2010). Our own ancient mariner. Literary Review of Canada. Retrieved