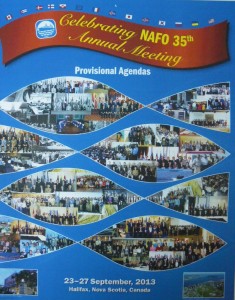 Founded in 1979 as a successor to the International Commission of the Northwest Atlantic Fisheries, NAFO is composed of twelve members or Contracting Parties: Canada, Cuba, Denmark (with respect to the Faroe Islands and Greenland), European Union, France (with respect to St. Pierre and Miquelon), Iceland, Japan, Republic of Korea, Norway, Russian Federation, Ukraine, and United States of America. NAFO is a prolific publisher of fisheries information as grey literature now available as open source documents on the NAFO Web site.

Throughout the annual meeting, the NAFO General Council, Fisheries Commission, and the Scientific Council, including their subsidiary bodies, met to deliberate on management measures and scientific assessments regarding the international fisheries in the NAFO Regulated Area in the Northwest Atlantic (see the media release). Total allowable catches and quotas were established for many NAFO regulated fish stocks for 2014. NAFO also took steps to enhance the dialogue between scientists and managers through the establishment of two joint Scientific Council and Fisheries Commission working groups.

Attending this annual meeting allowed members of the EIUI team to observe scientific advice being communicated within NAFO, as well as the development of management advice, and decisions reached. Direct observations of these activities will aid the EIUI team in its collaboration with NAFO to advance understanding of the complexities of information pathways and its use at the science-policy interface.