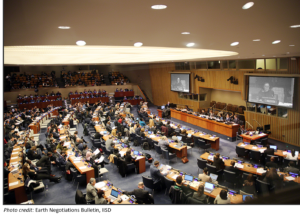 The United Nations Convention on the Law of the Sea (UNCLOS), a landmark international treaty that entered into force in 1994, provides the legal framework for the sustainable development of the oceans. UNCLOS covers a wide range of issues in a text containing over 300 articles. Over the decades since the treaty’s completion in 1982, gaps in UNCLOS have been highlighted, such as, exploitation of marine genetic resources and the degradation of the oceans due to marine pollution. On 24 December 2017, the United Nations General Assembly adopted resolution No. 72/249 to launch negotiations for a new international treaty that would provide a comprehensive ocean governance regime to address the gaps in UNCLOS. This resolution set up an Intergovernmental Conference on Marine Biodiversity of Areas beyond National Jurisdiction, designed to meet in four sessions scheduled from 2018 to 2020.

EIUI team member Elizabeth De Santo recently co-authored the third in a series of viewpoint articles, published in Marine Policy, that analyze the ongoing negotiations for the new treaty on the conservation and sustainable management of biodiversity beyond national jurisdiction (BBNJ). To date, three of the sessions have taken place (4-7 September 2018, 25 March-5 April 2019, and 19-30 August 2019). The fourth was scheduled to begin on 23 March 2020, but was postponed due to the COVID-19. The additional time that the postponement has provided the negotiators may prove fruitful for additional discussion and compromise; however, that outcome will not be known until the fourth session is held.

Elizabeth worked collaboratively with researchers based at the University of Rhode Island, Texas A&M University, and SINTEF Ocean, Norway to prepare the viewpoint papers. They have tracked the progress of the negotiations on the four key themes of the draft treaty: (1) marine genetic resources, including access and benefit sharing considerations, (2) area based management tools, including marine protected areas (MPAs), (3) environmental impact assessment, and (4) capacity-building and transfer of marine technology.

In the three papers, the authors have examined several key aspects of the negotiations, including debates surrounding the draft treaty’s endeavor “not to undermine” existing agreements, debate surrounding the common heritage of mankind versus freedom of the seas approaches, and regional versus global approaches to managing marine biodiversity. To learn more about their analysis, check the papers as follows: